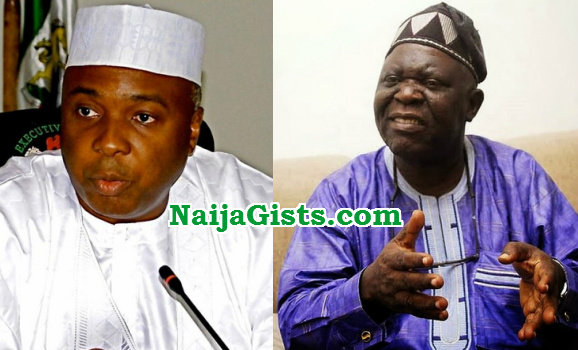 Chief Ayo Opadokun, the former Secretary-General of the National Democratic Coalition and ex-General Secretary of the Yoruba socio-political group, Afenifere has called on the All Progressive Congress Party to sanction Saraki for selling APC victory to the opposition party.

The fact that a senior member of the APC leadership, namely Dr. Bukola Saraki, for his vaunting and inordinate ambition, decided to go and sell the victory recorded by Nigerians against the Peoples Democratic Party to the PDP for him to become the President of the Senate is a major disaster and it has fundamental dimensions. It seems to some of us that it is a sure sign that some people in the conspiracy are already preparing themselves for 2019; that is one dimension.

Another fundamental dimension is that President Buhari will need to update, review and amend the laws and regulations upon which the anti-graft agencies are currently operating. He will need the National Assembly to be on the same page with him so that they can make amendments to such laws that may be envisioned by the executive. That seems to me to have been greatly subverted. Nigerians should not forget that Saraki was the Governor of Kwara State. He is currently facing a criminal trial on his performance in office. What they have done is that they have succeeded, as the leading cabal of governors, to totally subvert the basic laws of the country.

It is a kind of nauseating rehearsal to find that when the Economic and Financial Crimes Commission presents to the public that they are doing their job by taking them to courts, their (governors) lawyers will request for bail orally, the courts will refuse and ask them to bring papers for it. And the next time, the courts will grant them bail. When the EFCC wants to do something against them, they will secure injunctions called pronouncements halting and prohibiting any EFCC act on them. Almost 18 to 20 ex-governors are facing trial till today, and Saraki is one of them. That makes him a total misfit for that office in this period and that is part of our worries. A party leader, knowing what convention permits to happen for the majority party, decided that for his personal advantages, he should go and conspire with the minority party that had provided very wicked rule to Nigerians in the last 16 years, brought it back into reckoning and offered it the plump office the Senate Deputy President; that is total chaos.

Therefore, we believe that the APC has a duty to God, to Nigerians and to itself not to allow this kind of conspiracy to be left unpunished. The APC has to utilise all the provisions in its constitution to impose sanctions for such grave misdemeanour.