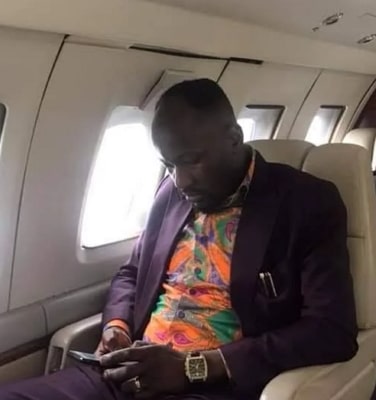 Sometimes in April, news broke of how outspoken Nigerian Pentecostal pastor and founder of the Omega Fire Ministries International, Apostle Johnson Suleman, had acquired for himself a private jet.

With words of praise like “God’s own oracle…the lion of Africa”, pictures and video of the man gracing the inside of the jet, the church’s Dubai branch announced the development.

Understandably, a number of Nigerians criticized the move. I expected such criticism, especially because the country recently became the world’s capital of extreme poverty. Some people, especially church members, quickly rose to the man’s defence. Even one time Special Assistant to former President Jonathan, Reno Omokri, made a Live Facebook video in which he explained how Apostle Suleman had sent two very poor church members to school abroad, how they finished, got very good jobs, made so much money, and then decided to buy the man a jet without his knowledge.

I wonder why Mr Omokri chose to offer such an apparently untenable defence of the man. Could he have been inspired by the fact that, according to his own words, the Apostle “…helped me raise money for the Free Leah Sharibu Movement”?

Fortified with the knowledge that private jets, private yachts and so on, are luxuries associated mainly with extremely wealthy people, I am tempted to ask why a man who, only weeks before, had admonished his members on the need to use their resources in helping the needy, would, rather than turn admonition on self, spend so much on a private jet.

Apostle Suleiman has joined the league of Pentecostal pastors like E.A Adeboye of the Redeemed Christian Church, Pastor Oritsejafor of the Word of Life Bible Church, Bishop Oyedepo of Living Faith Church and a host of others who own private jets, universities and other business concerns.

Despite the PR, the fact remains that Apostle Suleiman acquired his jet under conditions shrouded in opaqueness. That is why he needed members and allies to offer flawed explanations, and when all the justification didn’t fly and citizen voiced concern about the morality behind the whole affair, he turned around and told them to their faces; “…if you are complaining about one jet I don’t know what you are going to do when we get 50…load your gunpowder…because we are just starting.”

Coming from a man who relies on donations from which he is tax exempt, a man who has no credible patent to his name, his was not just a conceited response to the general public, but a statement that smirks of pride, totally unlike Jesus Christ.

Can Apostle Suleman deny knowledge of, or tell us in good conscience, the true source of the money with which he acquired the jet? With a church whose members do not exceed 100,000 worldwide, what exactly is so urgent about his message that he needed a jet to propagate?

The truth is that Pentecostalism in Nigeria has derailed from the message of Christ. The movement, by inference most of its pastors, who are supposed to be contributing positively to nation building as well as being the conscience of the nation, have failed woefully in that role.

We have reached a point in our history where, if we really want lasting resolutions to our countless national challenges, we need to take a critical look at the damage that Nigerian “Prosperity At All Cost” ministers are doing to the psych of our people.

We can’t pretend not to notice the social upheaval this sort of message has contributed to the Nigerian situation. Yes, they may give scholarships here and there, may pay hospital bills for this patient or that, and they may even give a bag of rice to this woman or that, yes. But the question is; what is the import of their message and lifestyle and its effects on the mentality of the people?

A recent column in Sahara Reporters insisted that “they laid the foundation of greed and social discontent from which the society is yet to come to terms. They departed radically from the preaching of the Lord Jesus which emphasised contentment and instead substituted greed and avarice into the social lexicon. They offer wishy-washy holiness and continue to inundate us with the doctrines of prosperity, albeit, prosperity at all costs. They decided to build a temple of materialism from which they hold the befuddled populace in a trance-like grip.”

Jesus Christ spoke truth to power and fought the cause of the poor. But most of our Pentecostal clergymen would rather wine and dine with politicians, even in the presence of abiding poverty and hunger.

From Prophet T.B Joshua who predicted a win for Hillary Clinton in the last US election to Apostle Suleiman, we have received a barrage of prophecies that never came to pass. For example, the revered Pastor Adeboye openly anointed Olusegun Osoba for the government house in 2003. The result? The man lost. Yet, in these men, we see the biggest proponents of a theology that says “God rewards the faithful with wealth and health”.

Apostle Suleiman has boasted that God told him he would get 50 jets. But why would a God who could give him that much not fix just one of the myriad economic problems that plague the tiny Auchi community where his church is domiciled?

Now that he has built his ministry on financial prosperity, what will he do when the donations dry up? Should not the story of one time “prosperous” Church of God Mission International serve as lesson in humility for him?

As a pastor, more than anybody else, the Apostle should know that his type of theology, which is so pervasive today in Nigeria, is a distortion of the message of Jesus and it doesn’t equip Nigerians to deal with the challenges of life, which are very rampant in our country today, especially man made ones.

If you preach that wealth and health is a sign of God’s favor, what will you do when you lose any or both? This is the question we must all ask ourselves. The revered Men of God, pastor Kumuyi and Pastor Odukoya are both good examples of this fact, when their amiable wives of blessed memories, passed under circumstances I believe they would not have wished for. But we are humans, we are frail and we are dust.

Because of this message, we have seen how believers get sick and some even die, yet shame compounded the grief. There is no graceful death in the “Prosperity At All Cost” and “I Cannot Be Sick” gospel. There are only jarring disappointments after fevered attempts by many to deny the inevitability; our humanity.

We must emulate Jesus who, in keeping with God’s heart expressed through the Prophets of old, carried on the tradition of defending the poor. He even told the church at Laodicea who boast as Apostle Suleiman does today, “You say, ‘I am rich; I have acquired wealth and do not need a thing. But you do not realize that you are wretched, pitiful, poor, blind and naked”

Jesus turned over the tables of moneychangers and drove out those who profited from religion, he called tax collectors to repentance, and said to “store up for yourselves riches in heaven where nothing can steal or destroy it”.

While Jesus isn’t suggesting that we all live destitute, he clearly warned about the great dangers of a desperate quest for wealth, and the power it has to shift the mind to things that are ephemeral.

The truth is, behind this quest for jets, private universities, trips to the most developed countries to “preach the gospel” and conveniently avoiding the Islamic world that needs it most, to build and own empires, is unbridled GREED.

These men may not see this, but the rest of us do. This is why I would conclude with the prayers of His Holiness, Pope Francis I; “…Lord, please touch the hearts of these people who worship… the god of money …And also touch my heart, so I don’t fall into this too, so that I can see.” Amen.