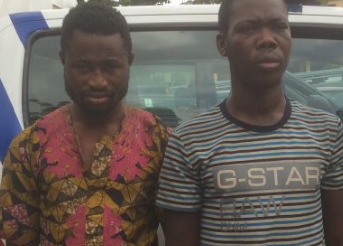 2 suspected cultists, Friday Iro, 22 and Daniel Emezemu, 28, were at the weekend arraigned in an Ikeja Chief Magistrates’ Court, Lagos, on charges on alleged robbery with a knife and belonging to a cult.

Iro and Emezemu, who live in Oshodi, Lagos, are being tried for alleged conspiracy, belonging to unlawful society and robbery.

The prosecutor, Clifford Ogu, had told the court that the offences were committed on March 28, at Ladipo Market, Mushin, Lagos.

He alleged that the accused belonged to a secret society called “Aro Bagger confraternity”, which disturbed residents of Oshodi, Mushin and their environs.

“The accused robbed Hammed Abdullah of his N13,000 at ‘knife-point,’ but they were later caught when they wanted to rob another person,” Ogu alleged.

He said a call was put across to the police that angry youths wanted to burn suspected thieves and the police came to the scene.

Chief Magistrate J. A. Adegun granted bail to the accused at N200,000 each, with two sureties each.

He adjourned the case till April 18 for mention. [NAN]

Continue Reading
You may also like...
Related Topics:arobanga confraternity, Cultists