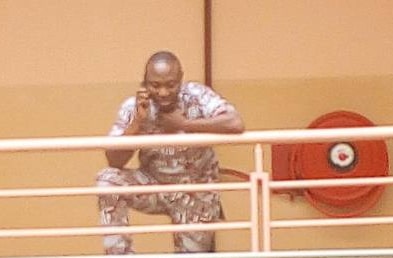 Prince Adebowale James of Kweme Land of Badagry, has narrated to an Ikeja Special Offences Court how his half-brother,Prince Semasa cheated his 26 siblings of N500 million inheritance from the estate of their father, the late King Afolabi James.

Adebowale was testifying at the resumed trial of Semasa and Afolabi Kazeem on a seven-count charge of conspiracy, cheating, stealing, forging of company resolution, fraudulent disposition of trust property and forgery before Justice Oluwatoyin Taiwo.

Led in evidence by the prosecutor Mr O. O. Olabisi of the Police Special Fraud Unit (SFU), Adebowale recounted how Semasa, the sole administrator of their father’s estate, abused his position and mismanaged funds.

He said the mismanagement of the estate was uncovered by his siblings after Prince Semasa cheated them of funds from the sale of a property at Dideolu Estate, Victoria Island, Lagos.

”My dad died on January 30, 2002, with 27 children surviving him and he left a whole lot of valuable property that I cannot fully mention in choice areas of Surulere, Ajose Adeogun, Victoria Island and Badagry. My father did not leave a will to the best of my knowledge.

“The first defendant (Semasa) is my half brother; he is the eighth child of the 27 children and the fourth son and the only administrator of the estate and the signatory to the account.

“Last year, on behalf of the family, I helped the first defendant get a buyer for the family property at Dideolu Estate, Victoria Island, I found a developer and the property was sold for N300 million.

“The money was paid in full and he (Semasa) took half of the money for himself and sent peanuts to the rest of the family. We had agreed on a sharing formula and everyone was to get an equal amount regardless of age.

“The beneficiaries who were 26 were supposed to get N10 million. I received approximately N7million while others got N5million each, the first defendant kept N190 million for himself sharing N110 million for the rest of us.”

Adebowale said Semasa had before sharing the proceeds, informed his siblings that he was entitled to N40 million from the sale of the Dideolu Estate property but for the sake of peace, the family decided not to challenge his claims.

“We got a real estate developer to work on the property, the family decided that we would give him the N40 million and share the rest, but despite our decision he kept a substantial part of the funds for himself,” he said.

Under cross-examination by Mr Martin Oyibo, the defence counsel, Adebowale told the court that he and other younger siblings had difficulty accessing funds for their school fees and upkeep while Semasa managed the estate.

“We used to collect our school fees from the first defendant’s office, it was always delayed and we could not function properly because of that.

“During the time we took the matter to the SFU, the family hired an auditor who revealed that he had mismanaged the estate to the tune of N500 million,” he said.

She adjourned the case until November 28, December 12 and 13 for continuation of trial.

Earlier, Justice Taiwo had granted Kazeem, the second defendant, who had been remanded in custody since November 12 bail of N5 million with two sureties in like sum.