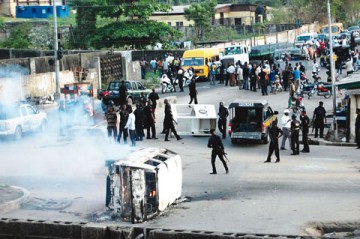 An explosion has shattered the arm of a teenager, Olawale Adekanbi, and caused confusion at the Agbado community in the Ifo Local Government Area of Ogun State.

The 17-year-old was said to be running an errand for his parents and saw a round object on the road which he reportedly kicked with his foot.

We learnt that as the victim approached the main road, he decided to pick the object with his hand.

Soon after he did, the object exploded.

The victim’s palm was reportedly shattered, while he also sustained injuries in the legs.

The incident happened on Saturday on Adiyan Road, Rafco bus stop, in the Agbado area.

Adekanbi, who is on admission at Dr. Happiness clinic, a local medical facility in the area, said he was returning from the errand when he found a “ball” and decided to play with it.

He said, “When I woke up on Saturday, my dad asked me to run an errand for him. When I was retuning, around 9am, I saw something that looked like a ball on the road and I started kicking it and playing with it.

“When I approached the main road and saw many vehicles on the road, I decided to pick it up. As I picked it, it exploded in my hand and shattered my palm.”

Our correspondent learnt that a crowd of people, who heard the blast, gathered round the victim.

His parents were said to have been alerted, and they rushed to the scene and took him to the hospital.

The victim’s mother, Wunmi Adekanbi, said she also heard the deafening noise of the explosion.

She said, “We were all in the sitting room that morning when his dad said the television was faulty and since it was election period, there was need to know what was going on.

“His dad said he should call the technician that would repair the TV.

“Some minutes later, we heard a blast and we were all frightened. People started screaming my son’s name and I rushed there. When I got there, his hand was gone.”

A resident, Opeifa Toriola, who said his office was far from the scene of the incident, told our correspondent the explosion shook the area, wondering how the victim survived the attack.

“My office is very far from where the explosion happened, but it shook everywhere. It still beats my imagination how he did not die. His palm was cut off, and he also sustained injuries in different parts of his body,” he said.

The traditional ruler of the community, Alhaji Lateef Adewale, said he believed it was a bomb explosion.

He said, “When I arrived at the scene and saw the victim, I knew it was not just an ordinary explosion. I have been a traditional ruler here for about 10 years and I have never witnessed this kind of thing before. It was nothing but a bomb explosion.”

The incident was said to have been reported at the Ayinla Police station.

He said, “We didn’t have any bomb explosion because we sent a team to the place, led by the OC Explosive Ordinance Department of the police, and we could not see any material, item or remnant to suggest it was a bomb. But they are claiming it was a bomb explosion that cut off the boy’s hand.

“Maybe it was a mysterious explosion, I cannot tell, because we could not see any material. The Commissioner of Police has ordered that the Divisional Police Officer and the EOD should continue to investigate the matter.”