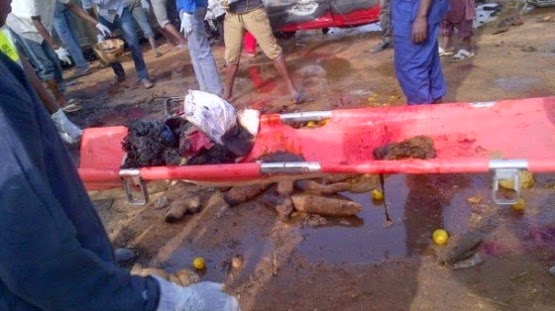 2 female suicide bombers on a mission to Maiduguri, Borno State capital, blew up themselves in a Borno community minutes before getting to their targets.

A military source said the two women believed to be Boko Haram insurgents, were brought to Auno, a serene community along Maiduguri-Damaturu highway, about 15 kilometres to the capital, by their guide on Sunday afternoon.

“Usually, suicide bombers have a guide, who leads them to the area where they will detonate the explosive devices. In some instances, the guide may even be around when the bomb will go off. We’ve received such report in the past,” the source, who is not authorised to speak to journalists on the matter told Daily Sun on condition of anonymity.

Some residents of Auno said the two women disembarked from a Golf car at about 2pm and started asking for Monday market, unknown to them that the market is located in the heart of Maiduguri, some 20 kilometres from the point where they alighted from the car.

“They stood by the roadside when some residents of Auno told them they haven’t got to Maiduguri,” a resident said by phone.

It was gathered that the explosive devices suspected to be wrapped round their bodies went off minutes alter, killing them and injuring some people, mostly children around the area.

He said “it will be difficult for Boko Haram to sneak bombers into the city now because security has been beefed up by the military in conjunction with other security agencies and the vigilance group.

“He urged the people not to fear, saying “peace is gradually returning to the state.”