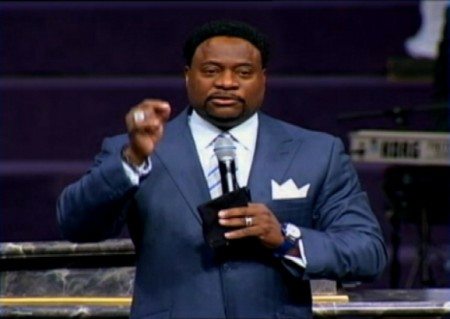 Atlanta, Georgia mega church pastor, has stepped down from the pulpit after his wife Vanessa files for divorce.  Bishop Eddie Long has announced to his congregation that he is taking a leave of absence from his role as the leader of the church.

Bishop Long made the announcement during Sunday morning service, but emphasized that he was just taking temporary leave of absence to take of some family business and not resigning.

“I am still your pastor. You’ll still receive my direction. You’ve given me some weeks to take care of some family business, If you go out there, the news said I stepped down, I haven’t stepped down, I’ve actually stepped up,” he said.

Inside sources say his wife want him to come out openly about the accusation of sexual molestation with young boys before their marriage could be salvaged, but the pastor is adamant he is innocent and would accept responsibility for an offence he did not commit.

Bishop Long married Vanessa, his second wife, in 1990 and has three children together. He has another son from his first marriage which ended in divorce.

Continue Reading
You may also like...
Related Topics:bishop, divorce, Eddie, Long, steps down