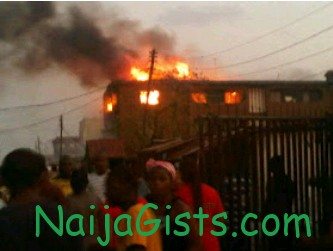 Boko Haram militants who have increased their deadly attacks on Friday set the house of Yobe’s first lady on fire in Damaturu Yobe State Nigeria. naijagists.com

The attack was carried out within 24 hours of a similar attack on major telecom masts in the Bauchi, Damaturu, Maiduguri, Potiskum and Kano.

.”We got a reportthat the house of the mother- in-law of Governor Ibrahim Gaidam was burnt down by unknown gunmen suspected to be members of the Boko Haram sect… everybody was asked to come of the house before they finally set it on fire. No life was lost,” he said.

In another development, 4 suspects have been arrested along Gujba Road in connection with Telecom masts destruction in the state.

Who else is safe in this country?