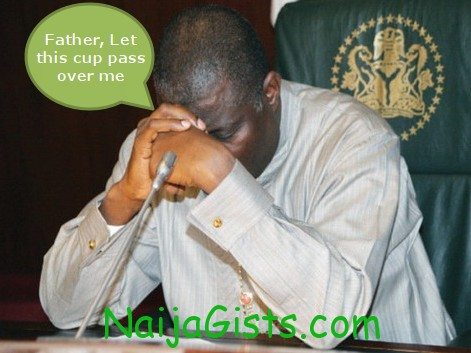 President Goodluck Jonathan has expressed sadness over the multiple explosions that rocked churches in Kaduna and Zaria on Sunday.

Jonathan expressed his sadness in Abuja at a special service to commemorate the 2012 Fathers Day. When called upon to give his remarks, the visibly gloomy Jonathan said he received the news of the blasts in the course of the service and was really sad about the development.

“Particularly today, I was quite thrilled about what was going on in the church and when I got the information that while we were here, there were explosions in Kaduna and since I don’t even know the casualty rate and what is happening; I have been quite sad and I didn’t even want to say something. But when the priest orders you, you must say something.’’

The president said he had consolation in God who is capable of handling every situation and healing the nation.

He solicited the support and prayers of every Nigerian for the peace of the nation and for the success of his administration.

Earlier in a message entitled “Sovereign Fatherhood of God’’, the guest speaker, Prof. Jerry Gana, said failure of leadership of homes was responsible for the failure of the society.

He noted that to build a solid society, the people must build good families by raising responsible and God-fearing children. Gana said one of the key roles of a father was to provide guaranteed security for his children.

He prayed that God would move to rescue the nation from its present state of insecurity characterized by suicide bombings and attacks on places of worship.

Gana called on the congregation to put its hope in God.

He read verses of Psalm 91 declaring God as the refuge of the nation and the leaders and the entire nation.

The first segment of the service witnessed Bible teaching led by the Chaplain of the Aso Villa Chapel, Rev Obioma Onwuzurumba.

The president opened the second segment and the main service with the Bible verses taken from the Book of Saint James Chapter 1, Verses 2 to 4.

This was followed by reading from the Book of Psalm 91 taken in sequence by the fathers and mothers in the congregation in the spirit of the day.

The First Lady, Dame Patience took the First Bible reading from the Book of Psalm 29, 1 – 11 while the second reading from Ephesians 3: 14 – 24 was taken by the Bayelsa Governor, Seriake Dickson.

Special songs were rendered by an all-male choir led by the president and prayers were offered for peace, security and prosperity of the nation and for divine guidance for the leaders.

The Executive Secretary of the National Christians Pilgrim Commission, Mr. Kennedy Okpara, some members of the diplomatic corps and presidential aides were also among the congregation.(@pm)