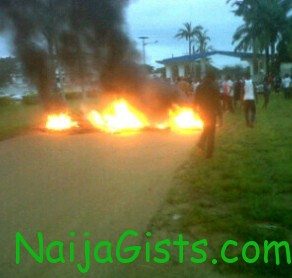 According to email messages received from scared female student of Igbinedion University, ex-militants were reported to have invaded the school at around 5am on Sunday morning. naijagists.com

We learnt the militants are currently vandalizing cars and killing anybody they meet on the way.

Several students have been reported injured during the machete & shoot gun attack.

Some student have been kidnapped.

They’ve also blocked the main gate of our school so no one can come in or go out! – female witness.