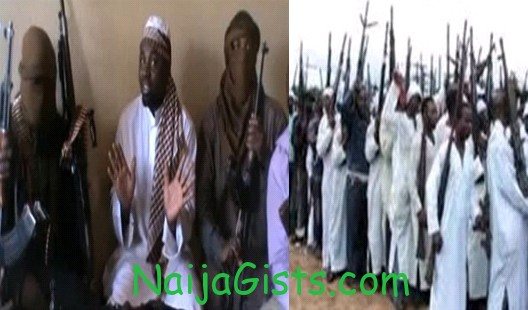 “We killed two top commanders of Boko Haram in a shootout outside the city on their way to Damaturu (capital of neighbouring Yobe state) where they planned to attack some military and civilian targets,” he told AFP.

“We recovered a car, five mobile phones and weapons from the terrorists,” “Eight Boko Haram terrorists are now in our custody from raids we carried out in some parts of the city,” Musa said.

We learnt the 8 suspected Boko Haramists were arrested as they were planning to carry out deadly attacks in other violate states.

He further stated the commanders were arrested after a tip-off on the intending attack on civilian & military targets in Yobe.

On Monday, a suspected spokesperson for Boko Haram & a top official were killed in Kano.

The sect’s spokesman, Abul Qaqa and a field commander for Abuja, Kogi & Kaduna were shot in a shootout.

Qaqa died on the spot while the field commander died of gunshot wounds later in the hospital.