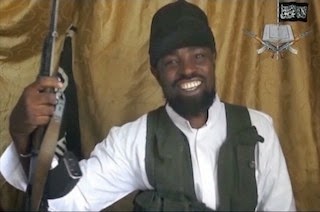 Over 3 days after a suicide bomb blast that killed over 75 people in Abuja, Boko Haram leader, Abubakar Shekau has confirmed that the dreaded Islamic sect carried out the attack.

“We are the ones that carried out the attack in Abuja,” Shekau said in the 28-minute video, referring to the deadliest attack ever in Nigeria’s capital which targeted Nyanya bus station packed with morning commuters.

Seated with a kalashnikov resting on his left shoulder and dressed in military uniform, the insurgent commander spoke in both Arabic and the Hausa language that is dominant in northern Nigeria. The message was delivered to AFP in a manner consistent with previous videos from Boko Haram.
Shekau indicated that Boko Haram has fighters based in the capital. Referring to President Goodluck Jonathan, he said:

The bombing at the Nyanya bus terminal on the outskirts of Abuja was the first major attack in the capital in two years. Most of the insurgents’ violence in recent months had been concentrated in the group’s remote northeastern stronghold, where the military is waging an 11-month-old offensive.

Shekau has been declared a global terrorist by the United States, which has put a $7 million bounty (5.1 million euros) on his head.