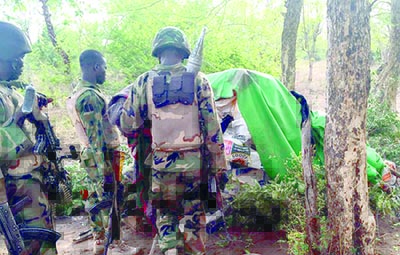 The Nigerian Army said yesterday that its troops are making tremendous progress and have made deep foray into Sambisa in a special operation tagged: `Operation Crack Down.’

It said that four more villages in the terrorists’ enclave including Bala Karege, Goske, Harda and the famous Markas 3, had been cleared.

The statement said the troops cleared the villages on Sunday May 8, 2016 with no encounter with the terrorists as they had abandoned their enclaves before the arrival of the troops. Usman said the advancing troops recovered several arms, ammunition and items from the terrorists’ enclaves. According to Usman, items recovered include suicide vests and quite a number of high calibre weapons.

“The weapons include; one Rocket Propelled Grenade (RPG) Bomb, 18 rounds of 23mm Shilka ammunition, one Barrel of AK-47 rifle and one Extra-barrel of General Purpose Machine Gun (GPMG). Others include; three AK-47 rifle magazines, metal link of 12.7mm ammunition, a heavy-duty solar panel battery, 10 vehicles and 50 motorcycles belonging to the fleeing terrorists.’’