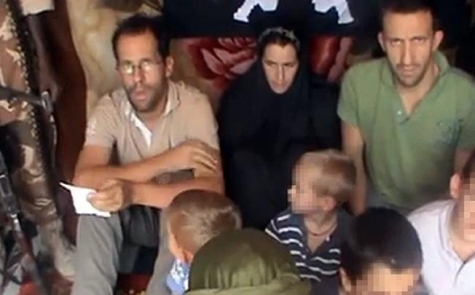 Weeks after the release of kidnapped French family in Nigeria, a new report of the ransom paid has surfaced.

Apparently Boko Haram leader Shekau initially demanded for N1 billion to secure their release but after back and front negotiations, the amount was reduced to N500 Million

According to a report from Premium Times, Boko Haram were paid N500 million ($3.15 million) to free seven French hostages kidnapped in February, a confidential document from the Nigerian government available to Reuters states.

The insurgent group kidnapped the French hostages in Cameroon on February 19 near Wasa National Park in Northern Cameroon, which borders North-Eastern Nigeria.

The hostages, a family of seven including four children, are believed to have been brought into Borno State after the kidnap. They were released two months after the kidnap on April 19.

The document, according to Reuters, did not state who paid the ransom although French and Cameroonian authorities denied that any ransom was paid.

Apart from the money the insurgents were paid, the document states, Cameroonian authorities also released some Boko Haram suspects in detention as part of the deal.

The sect had threatened, in a video released on YouTube in March, to kill the hostages unless Nigeria and Cameroon release some of its members in custody.

The report also states that Abubakar Shekau, the sect’s leader had asked for N1 billion to free the hostages but finally accepted half of the money, after agreeing to the release of his members in Cameroonian jails as part of the deal.

French President, Francois Hollande, denied that any ransom was paid when the hostages were released, same as Cameroonian authorities. No one has, however, said what got the insurgents to release the hostages.

Boko Haram is blamed for killings of several hundreds of people in Northern Nigeria and has claimed responsibility for several attacks.

Efforts to get the federal government to react to the report were unsuccessful. The Minister of Information, Labaran Maku, and his spokesperson, Joseph Mutah, could not be reached as their telephone numbers were not reachable on Friday evening.

The spokespersons to the Nigerian President, Reuben Abati and Doyin Okupe, did not pick or return calls to their phone as at press time.

According to Reuters, the report suggests that the ransom was paid because officials did not want to endanger the lives of the hostages in a rescue attempt; after a rescue attempt last year March to save a Briton and an Italian hostage kidnapped by another Nigerian sect, Ansaru, led to the death of the hostages.

Apart from waging a war against the Nigerian Government, Christians and Muslims opposed to his terrorist acts, Boko Haram has also delved into kidnapping for ransom, largely to finance its operations.

Apart from kidnapping for ransom, the group also robs banks in Northern Nigeria to finance its operations.

PREMIUM TIMES had also exclusively reported how a security report sent to the Nigerian Presidency last year showed that Boko Haram got N40 million from an Algerian terrorist sect as part of a long term international terrorism collaboration.