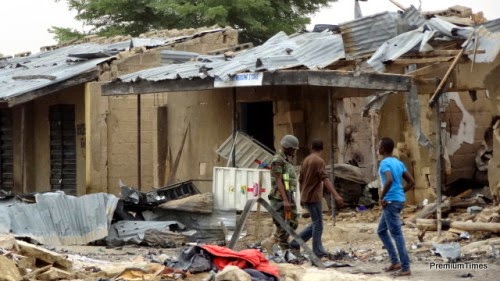 In the attack, a Pastor from Akure in Ondo state, Taiwo Dokun was butchered by the terrorists.

“The pastor was in his house at about 6am when the insurgents attacked the village, his house was surrounded by the hoodlums and while attempting to run, he was shot. He was running to a neighbour’s house and it was in the course of his fleeing that he was shot in the head and the chest and the insurgents equally came to butcher him to make sure that he was dead,”.

He said the terrorists then went into the pastor’s house and burnt it, adding that Boko Haram fighters may have abducted the pastor’s wife and three children “who are apparently inside the house” at the time of the attack.

“The family could have been abducted by the insurgents who took away many of the residents of the town because we didn’t see the family members since then and none of them has called us. Though their residence was completely razed by the insurgents, we didn’t also find their corpses in the debris. This is our dilemma now,”.

“He might be buried at Mubi for he was initially taken to a Mubi hospital where he was embalmed but because it was not properly done, the corpse started swelling up and a decision was taken to bury him in the town.”