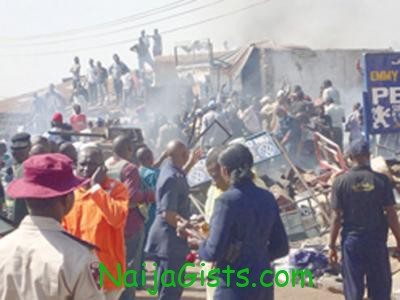 At least 16 people have died following an attack in Maiduguri, Damaturu and Potiskum, Ibrahim Farinloye, the northeast coordinator for the National Emergency Management Agency said on Friday. naijagists.com

The attack happened on Thursday evening and sources said more gun fire was heard in Damaturu early on Friday morning.

According to our sources, about six blasts and gunfire hit Maiduguri, after explosions and shooting earlier broke out in Damaturu.

Gunshots were heard in Potiskum and fire could be seen in a housing complex, a police station, fire station and road safety office, residents said.

In Damaturu, a source said a soldier was killed in the violence.

Yobe State police commissioner, Lawan Tanko blamed the recent attacks on suspected members of the Boko Haram Sect which has held the northern parts of Nigeria under siege since 2010.

“There have been bomb and shooting attacks by suspected Boko Haram elements,” Tanko said.

“They engaged our men in a shootout and our men have succeeded in repelling their attacks and have pushed them toward Potiskum.”

Tanko added that he did not have details on casualties, but said that a church and a military patrol van were burnt.

Residents in Maiduguri and Damaturu have started fleeing the cities for refuge.