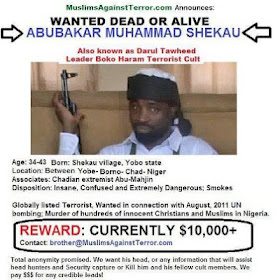 The group has place $10,000+ rewards for any useful information leading to his death or arrest.

Boko Haram militants are said to be taking orders from Shekau.

Any of the suicide bombing attacks are currently being ordered from his hiding place along the chad border.

Anti-terrorism experts will be required for his capture.