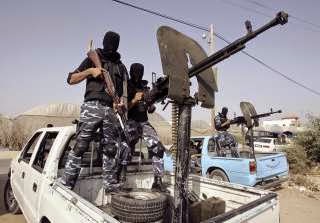 The latest report coming out from Borno has indicated that the dreaded Boko Haram jihadists have succeeded in taking over an entire town in Borno state.

Worst still, they have relocated to Gwoza town from their hideout in Sambisa forest.

Villagers said more Boko Haram terrorists have entered Nigeria from Cameroon a day after Cameroon declared war on the terrorists.

This follows the sustained territorial conquests by the insurgents who have occupied the army base in Gamboru town in Borno State which they took over on Monday, witnesses said.

A senior official in Gwoza town in Borno captured on 6 August, told AFP that the insurgents have turned the sacked emir’s palace in Gwoza to their headquarters.

“As you are aware, part of the administrative unit of the palace was destroyed but the insurgents are using the remaining part as their headquarters,” he told AFP.

“In the past few days, even the old people who could not move to anywhere were taken out by the Boko Haram. They put them in vehicles and drove to the outskirts of Limankara, 16 kilometres away and left them there. Both Limankara village, the police training school there, Pulka village and dozens of communities around Gwoza are all under the control of the Boko Haram,” the official said.

Villagers living near Sambisa forest in Borno State reported seeing a large number of Boko Haram militants leaving the camp and moving towards southern Borno with their families and possibly many of their hostages to as Gwoza, Buni Yadi, Ashigashya, Madagali among others captured recently.

A villager in Kirawa, a town on the Cameroonian side, also said he had seen some suspected Boko Haram militants moving through Cameroonian territory to Nigeria with large amounts of cargo in tightly secured convoys.

They have also taken over the Vocational Training Centre in Gamboru by stationing dozens of their fighters there and are giving orders to residents.

On the other hand, hundreds of Cameroonian soldiers are on alert at the border between Nigeria and Cameroon, apparently in readiness to confront the insurgents in case they make any move to encroach into their territories, sources said.

A source said they are currently near Fotokol, across the river that also serves as border between Nigeria and Cameroon.

Various sources in Gamboru said Nigerian soldiers are yet to return to the town after they fled to Cameroon following a fierce fight with the insurgents on Monday.

“We are still at the mercy of the Boko Haram insurgents who have taken absolute control of Gamboru,” Mukhtar Aliyu Modu, one of the residents who still lives in Gamboru said.

“The insurgents have everything, including sophisticated guns, armoured personnel carriers (APCs) and many other vehicles. They also have countless motorcycles. Some of them are currently patrolling Gamboru but they did not kill anybody or attack our houses, shops and other personal effects.

“I cannot tell you how many they (Boko Haram) are but from all indications, they are in hundreds because they have divided themselves into many subgroups. They are going round talking to people, not really preaching. They are saying those who are not willing to stay should quietly move out of the town, insisting that they did not come to kill us,” Modu said.

Another resident of Gamboru who gave his name as Makinta said they are still living in fear.

“The insurgents are in charge and we were terrified in the morning when we heard about 10 simultaneous sounds of explosives. We thought the insurgents had started destroying our town but later found out that the explosives were buried near the border between Nigeria and Cameroon. I think it was the insurgents that buried them to serve as traps but luckily enough, nobody, either civilian or Nigerian troops passed through the area while fleeing to Cameroon at the height of the fight on Monday,” Makinta said.

He said at about 4pm on Tuesday, the Boko Haram insurgents did not make any move to confront the Cameroonian troops who were around Fotokol, one of the major towns in Cameroon that is not far from Nigeria.

Displaced persons from Gamboru-Ngala are trapped in Fotocol unable to find food and shelter three days after Boko Haram militants sacked their hometown and surrounding villages.

A heavy rainfall made it impossible for their relatives and aid agencies in Cameroon to reach them.

Meanwhile, findings by our correspondents reveal that Gwoza, which Abubakar Shekau declared as an “Islamic Caliphate” in a video released on Sund,ay is still under control of the Boko Haram. Credible sources said Nigerian troops are yet to mobilize to the town which was subdued on 6 August.

While dozens of people, most especially youths, have been killed at the height of the crisis, it was gathered that almost all the locals in the town, which has a population of over 50,000 have fled.

“As far as I know, there is nobody in Gwoza except the insurgents,” a senior official from Gwoza said.