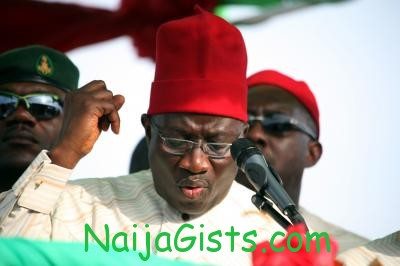 President Goodluck Jonathan on Tuesday shot his arrow of anger against members and sponsors of Islamic sect – Boko Haram, describing them as “primitive and uncivilised”.

President Jonathan said: “Terminating innocent lives through terrorist acts is primitive, so perpetrators and sponsors of terrorism through Boko Haram cannot be anything but uncivilised.”

The president said this in Dutse, Jigawa State capital as he ended his two-day visit to the state.

He said it is wrong for any individual or group to shed human blood in expression of grievances. The President said Boko Haram’s insurgence was hampering national development.

The president therefore called on all Nigerians to speak out in condemnation of terrorist acts in the nations.

The dreaded group has since 2009 attacked military and police facilities, worship centres and drinking joints among others in the Northern part of the country, killing no fewer than 1,000 persons.

Last Thursday, Abu Mohammed Ibn Abdulaziz, the acclaimed second-in-command to the leader of the sect, said they were willing to dialogue with the government on certain conditions.

According to them, the peace talk must hold in Saudi Arabia; that a former Head of State, Maj.-Gen. Muhammadu Buhari, must serve as one of their mediators and payment of compensation to members of the sect killed ‘unjustly.’

A very reliable insider in the Presidency had on Sunday said, “I can confirm to you that it is true that the group is currently talking with the government.

“The good news is that they are talking and they have promised to cease fire once some of their demands are met. For conditions that are not difficult to meet such as the demand for Diyya for their 24 identified members that were killed, the government may meet such demands.

“Government can also give critical thought to those found to be innocent, but are being detained or prosecuted, particularly women and children as demanded by the group since they do not have any objection to the trial of those genuinely involved in crime.”

Meanwhile the Christians Association of Nigeria on Tuesday kicked against compensating members of the sect.

CAN said it would also demand compensation should the Federal Government compensate members of Boko Haram.

CAN Secretary-General, Dr. Musa Asake, said paying compensation to Boko Haram members would be an insult to the Christians community.

Asake said, “These are the people that are killing us and they are looking for compensation. The Federal Government should not even listen to that because the fact that we Christians are keeping quiet does not mean that we are dumb.

“We are looking for peace and we want peace. But when they begin to talk of compensation, the question is, compensation for what? After they have killed people, made many children orphans and destroyed our churches and they are asking for compensation”

He said that the association would demand compensation for churches destroyed and members killed by Boko Haram.

The CAN secretary stated, “When you begin to talk of compensation, how can you compensate somebody who has been the breadwinner of an entire family and he is killed? How much will you give to keep that family going?

“If that is the dimension that Boko Haram wants, we are ready. If government pays them compensation, then we too will demand compensation for our people that have been killed.”

“Why Saudi Arabia? Why Buhari? Why these people that they are mentioning? We are very interested. They did not mention any Christian; they are killing us and they want Muslims to go and decide it. To decide what?” he asked.

“What have they said about the Christians that are being killed? Is that not human rights abuse? How did they know what has happened? This thing is taking a different dimension and where are they getting their information? Who is feeding them with that information? I have not read where the human rights people are condemning what Boko Haram is doing to Christians?”

However, a traditional leader and Saridauna Samaru in the Zazau Emirate Council, Zaria, in Kaduna State, Alhaji Mohammed Bello Sa’id said he’s in support of payment of compensation to Boko Haram.

He noted that if compensating the families of the killed members of the sect would mak them ceasefire, then the Federal Government should do so.

“We are interested in what will bring peace to the country and if compensating Boko Haram family members will bring peace, so be it,” the monarch said. (Source: DailyPost)