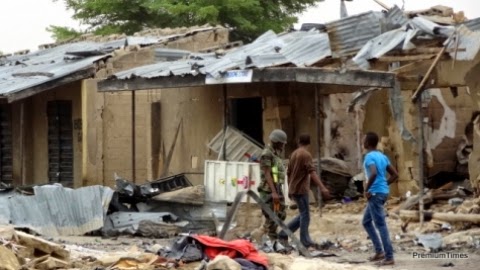 According to a village source, the terrorists arrived Kanuyya village in the wee hours of Sunday in 3 military vans and several motorcycles.

They drove to the residence of the district head and demanded N250, 000 in order to spare the town and its inhabitants. When the community leader told the militants that he could not afford the sum, they asked him to summon other residents of the village to contribute the amount. The villagers were only able to N71,000.

The robbers later handpicked 29 villagers and tied them up before shooting them in the head. They also set houses on fire and burnt some vehicles loaded with foodstuff.

“Go to some of these villages in Borno and you will see that they are now desolate. Farmers are no longer able to continue farming in many parts of Borno State,” said a Maiduguri-based political activist.

Since the beginning of this year, Boko Haram has attacked over 55 villages in Borno state alone. Many of these attack hotspots have become desolate.