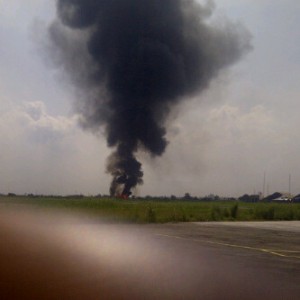 Sources from Borno state claimed that the military jet was shot down by missiles fired by suspected Boko terrorists in troubled Bama area of Borno state killing all on board this afternoon.

Hear what the defence spokeman Chris Olukolade said about the crash:

“A Nigerian Air Force Mi-35 Helicopter on training mission this afternoon, crashed due to technical fault at a location South of Bama.”

Olukolade said investigation has started to figure out what led to the crash.

See confusion, they said it wasn’t Boko Haram and the same time they’re still investigating what led to the crash. If it’s technical fault, what else are you investigating….?

This military self their lie lie too much.

RIP to the deceased officers.