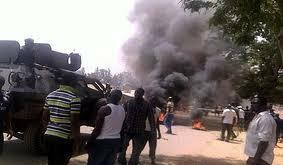 NO DEATH AS SUICIDE BOMBER STRIKES CHURCH IN GOMBE.

The gory tale of insurgency has seen no end. it couldn’t have being the best start of the year save for the timely intervention of Church volunteers at the premises of the ECWA church, Tudun Wada, Gombe.

A suicide bomber blew himself up outside the church at about 9am on new year day after he was successfully restrained from entering the church.

The man who had arrived on a bike insisted breaking through the barrier which had being place around the church thus attracting church volunteers. It was while arguing with the volunteers that his suicide belt exploded.

Nobody was killed however unspecified number of persons were injured and rushed to the general hospital by the men of the Red Cross.