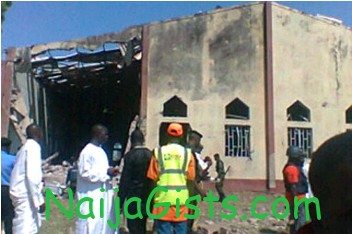 The suicide bomb blast rocked St Rita Catholic Church around 8.30 in the morning.

According to witnesses, a suicide bomber had rammed a car loaded with explosive device into the church.

An eye witness said 8 people including the suicide bomber have died. His shattered body was removed from the scene in a van.

Another eyewitness revealed that the suicide bomber , who left his SUV at the entrance of the church anxiously waited up until the commencement of the mass and then he tried to force himself into the church via the main gate.

The suicide bomber who was refused access by security guards stationed within the gate gate, pushed himself by force into the church & the car bomb exploded .

“We noticed the vehicle parked outside our church, when we were entering the church for early morning mass but we never thought that the fellow is a suicide bomber, it’s very sad ”, the witness said.

Reports of this suicide bomb attack went viral in Kaduna making it hard for people to attend church on Sunday.

Earlier, concerns had been expressed that the bomb could cause serious damage since it sounded just like a major earthquake.

According to a local resident, the suicide bomb blast caused serious panic in Malali as people run for cover before discovering that it was a suicide bomb explosion.

“The bomb blast caused a major vibration in the whole area and it was totally obvious it’s a blast, ” Musa said.

Lara George Gives Birth To Baby Girl
Goat With Allah Written On Skin Up For Sale For £128,000