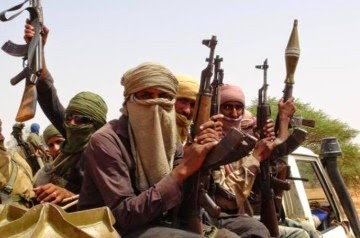 In a desperate bid to Islamise the northern part of Nigeria, Boko Haram Jihadists have started taking over strategic towns in Borno and Adamawa states.

2 days after Boko Haram took over an entire town from the hand of the military in Adamawa, another town has been captured.

Gulak and its environs in Madagali LGA of Adamawa state is now in the control of the dreaded Islamists.

On Sunday, the sect overpowered the military again and took over Michika town.

Survivors said they massacred over 100 people.

Hear what an escapee said:  “They killed several of my friends, they rounded dozens of young people, lay them on the ground and slit their throats while the elderly were shot at close range”.

These terrorists are winning because of the overwhelming support they are receiving from top commanders in the military and their sponsors.

God pass them, their end is very near. RIP to the victims.