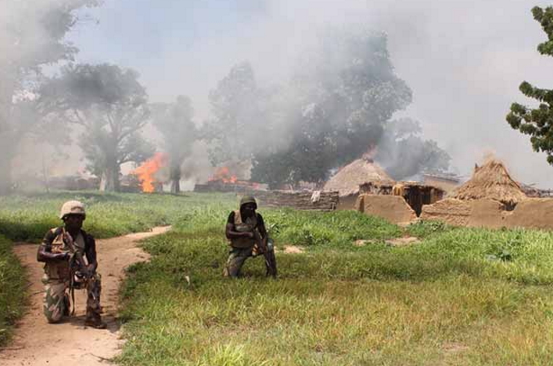 The statement said: “Boko Haram terrorists on sighting the advancing troops towards their location, fled in disarray abandoning looted food items and other personal effects.”.
“ These items recovered included a Grinding Machine, Dane Guns and Bicycles as well as Boko Haram terrorists’ hoisted flag which was brought down and destroyed by the troops”, the Media coordinator stated.

Gusau said their troops also continued to dominate the area in order to deny the terrorists freedom of action and frustrate their nefarious intents and acts.

The statement further stated that, the Theatre Commander, Operation LAFIYA DOLE, Major General Yusha’u Mahmood Abubakar, while commending the troops for their gallantry, encouraged them to keep the tempo so that the deadline set to end Boko Haram terrorists’ activities in Nigeria and the North East in particular, could be achieved.