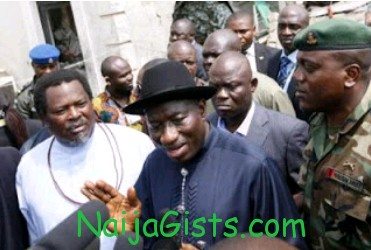 Boko Haram‘s proposed dialogue with the Nigerian Federal Government in Saudi Arabia has been threatened as most members of the nomination committee have denied the sect. naijagists.com

Ex-Yobe State governor, Senator Bukar Abba Ibrahim who was nominated by Boko Haram said he was neither contacted nor consulted before his name was released to the public as a nominee, saying that he had no position on the offer until officially contacted by the sect.

According to him, “nobody contacted me. Nobody consulted me about it (negotiating team) and I would not say anything about whether I am going to accept to serve on the team or not, until I am officially contacted by the group.”

When asked if he could hypothetically say whether he would accept to represent the sect in the proposed peace talks, the serving senator insisted that only an official invitation would make him take a position publicly on the issue, while assuring Sunday Tribune that he would make his position known to it once an official offer was extended to him.

He did not say if he had any form of contact with the sect in the past.

A security source also revealed to Sunday Tribune last night that the Federal Government had decided to be more careful with the sect’s peace offer due to the killing of General Mamman Shuwa by its suspected members, moments after the so-called ceasefire was declared.

The source further noted that even without the killing of the General, government had insisted on past talks with different representatives of the group that any negotiating team from the sect’s end, excluding its spiritual leader, Ibrahim Shekau, would not fly with the government.

The non-inclusion of Shekau’s name in the list released by the sect, according to the source, had put the possibility of the proposal becoming a reality in serious doubt, “because we don’t want to spend time, energy and resources talking peace, which he could repudiate by claiming he is not a part of it.”

Shared intelligence between Nigeria and global allies reportedly traced him to Northern Mali under the protection of the leader of the coup that toppled the country’s elected president, General Shanuke who also has loyalty of Mali’s armed forces.

The source added that earlier in the year during a certain lesser hajj in Saudi Arabia, the National Security Adviser reportedly met with the sect’s representatives without Shekau, where he reportedly insisted that there would be no further progress on the talks unless Shekau made himself available.

The Saudi meeting is reportedly the precursor to the peace meeting called by the sect, though it was yet to fulfil government’s demand for Shekau’s involvement.

The security source told Sunday Tribune it was discovered that there were a lot of interests working within the system and “we have to determine whether the offer is genuine before we can make any commitment to the proposed talks. There are a lot to consider and too many grey areas to be sorted out. The killing of General Shuwa is creating a lot of doubt with us about the genuineness of their readiness. No government team in place yet. It is too early for that now.”

Meanwhile, a tact team of the Federal Government is said to have commenced close analysis of the mediators named by Boko Haram in the ceasefire option announced on Thursday, sources close to the government have said.

The sect had, in a teleconference with journalists on Thursday, asked the Federal Government to accept a ceasefire option which would see some eminent Nigerians leading its dialogue.

It was gathered that the government team is trying to X-ray whether the team can effectively handle the dialogue and convince the sect to drop violence as a means of showing its grievances.

It was gathered that the government has welcomed the peace option from the sect as the first step towards an amicable resolution of the violence that has engulfed some states of the North for some time.

A source in the know said the government had no reservations about the announcement of the planned ceasefire by the militant sect, adding that the administration had always announced its preference for peace and dialogue.

The source said: “The government has always been convinced that peace and dialogue remain the best avenues to resolving issues. Even in situation of war, the parties have always returned to the dialogue table. We are sure that dialogue is the best way to resolving the logjam.”

It was, however, further gathered that some forces in government are already unearthing the likely hurdles against the peace option.

A source said the government was analyzing all issues so as to ensure that the proposed negotiation achieved the desired objectives.

One of the issues being raised is that one of the nominated mediators had been vocal against activities of the Joint Task Force (JTF) in the past and that the said person has always condemned JTF for allegedly killing civilians. Another issue already raised, according to the source, is that one of the proposed mediators was only recently forgiven by Boko Haram after the person allegedly offended them and went underground.

The team was also said to have raised the allegation that one of the persons named had his son fighting alongside the Al-Qaeda in Islamic Magreb (AQIM) in Mali and that the government wanted to ensure that the team of negotiators could really handle the situation.

“The government wants to have a solid ground in going into the talks. That is why a lot of information coming out is being examined,” a source close to the administration said.(Source:Tribune)