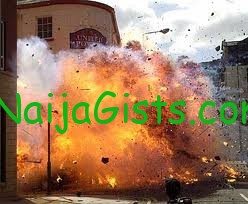 According to witnesses, the explosion took place at a beer parlour near the Tundun Wada motor park.

The casualty figure could not be ascertained as at press time. The scene of the explosion is about 300 metres from the headquarters of the Special Task Force (STF), the military team in charge of security in the city, and barely 200 metres from Governor Jonah Jang’s Lodge in Jishe.

Security men immediately cordoned off the area after the blast

Spokesman of the STF, Captain Markus Mdahyelya, who confirmed the explosion, however said no one was either injured or dead in the blast. Eyewitnesses however said about four people were injured and taken to Jenvak Hospital .

When our correspondent visited the hospital, only one of the injured was admitted due to trauma while the others had been treated and discharged.

The blast – believed to be from an improvised explosive – forced people to return home early, cutting short their Easter celebration.

When will these explosions stop?