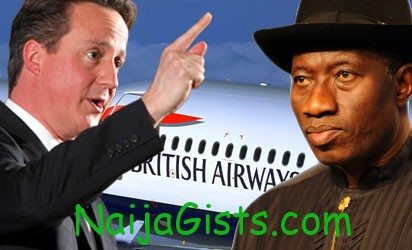 This threat from the British Government came as a result of the ultimatum announcement given by Nigeria’s Aviation Minister, Princess Stella Oduah over the weekend that all foreign airlines will be given a 30-day ultimatum to adjust its fares to reflect equity with their prevailing fares on the West Coast or face ban from operating in the Nigeria. naijagists.com

In response, the British government issued a stern warning to Nigeria that it would take retaliatory steps against its airlines, if the federal government bans UK based carriers over fare disparity. Britain further stated that banning private airlines from operating in Nigeria would amount to a “heavy-handed action that would be catastrophic.”

According to a British High Commission spokesman;

“It (the ban) would cause potential foreign investors to question whether they want to put their money in Nigeria and have a long-term and damaging effect on Nigeria’s growth.

“We are seriously concerned and worried by the reluctance to restore parity within the region by the foreign airlines. They have been using all kinds of delay tactics; this is unacceptable and will no longer be tolerated. We will resolve this issue once and for all.”