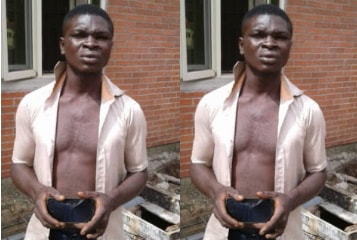 An Abeokuta Magistrates’ Court in Ogun on Wednesday sentenced a 31-year-old man, Oresanya Olamilakan, to two years’ imprisonment for stealing a cell phone valued at N35, 000.

Olamilakan of no fixed address had pleaded guilty to a two-count charge of break-in and stealing.

The magistrate, Mr Aliu Soneye, in his judgment said that with the evidence tendered in court, the prosecution had proved its case beyond doubt.

He then ruled that the accused was guilty of the two charges levelled against him.

He, therefore, sentenced Olamilakan to one year imprisonment each on the two charges.

“The sentence will be run concurrently and without an option of fine,” he said.

The prosecutor, SP Famous Edigbue, had told the court that the convict committed the offences on March 19, at about 1.30 a.m., at the Federal Housing Estate, Olomore in Abeokuta.

Edigbue said the accused illegally entered the house of the complainant, Mr Arowosegbe Dare, and stole a Piano Spark 4 Plus phone valued at N35, 000.

Continue Reading
You may also like...
Related Topics:abeokuta, burglar, jail