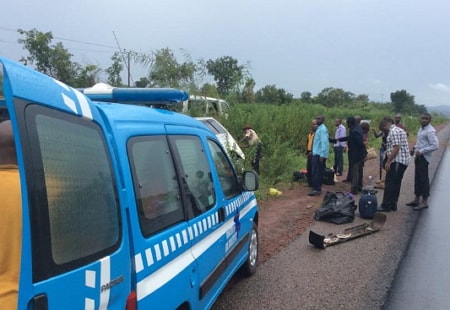 A motor accident involving a commercial bus along Siun – Kobape stretch of the Abeokuta – Sagamu road has left two women dead and five others injured.

The Mazda bus marked marked KSF 347 XG took off around 7:55 am at the popular Kuto garage and was carrying 14 passengers to Ijebu – Ode when one of its tyres dropped along with the chassis at the Siun – Kobape area.

The driver lost control of the wheel, rammed into a concrete structure on the road median, somersaulted and in the process, two female passengers were thrown out of the window – and died.

The Public Relations Officer of TRACE, Babatunde Akinbiyi, who confirmed the accident, said it was a lone accident that happened when the bus’ front tyre by the driver’s side, pulled out with the chassis while on motion.

“When the vehicle lost control, it ran into the road divider, hit the electric pole by the side and somersaulted. It was in the course of the somersault that two female passengers were thrown out of the vehicle, because they didn’t wear seat belts and died.

“Remains of the dead passengers were deposited at the Olabisi Onabanjo University Teaching Hospital (OOUTH), Sagamu, while three of the injured were taken to the same OOUTH and four others taken to Owode General Hospital, Owode,” Akinbiyi said.