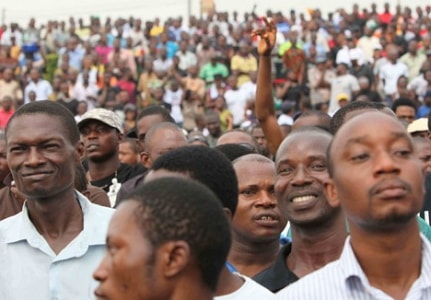 Money! Good old money! It sure makes the world go round. The importance attached to it cannot be over emphasized and the high demand for it is overwhelming. Show me that man that hates money and I will show you a billion more that are craving for it. The financial stability of every man makes the pursuit of it dangerously critical.

Nigeria with a population of over two hundred million is to a very large extent over populated with poverty stricken families. In the country there is a higher number of families incapacitated with poverty compared to the number of people blessed with enormous wealth. It is apparent that the gap between the rich and the poor is so wide and seems to be mounting by the day. And I am sure a lot of people would have wondered why. Well it is not so far fetched, as the economy is obviously one of the culprits if not the main culprits. It appears that the economy of our dear country, over the years have made life more and more difficult for the ordinary man in the society, thereby breeding more poverty stricken people than wealthy citizens.

And the question that is often asked is; can the economy be redeemed from poverty?  Is there really a solution for poverty to cease in the land? Can everyone be rich? Can poverty be totally wiped out in Nigeria?

Nigeria is popularly said to be flowing with milk and honey. In fact some people are of the notion that the country is too rich to be poor. And lots of researches have shown that the country is robustly rich in mineral sources and so on. But the question still is can poverty be eradicated from this rich land? Or better still can it be reduced to the nearest minimum? Now the seems possible right but how viable is that in this dispensation. I dare say most unlikely but there again one would wonder why the seeming impossibility. What makes it so impossible is it government, its policies or the individuals that make up the population

It is undeniably true that for the economy to grow poverty needs to go, and in spite of various programmes by various administrations to eliminate it, this menace called poverty has refused to find its way out our dear country.

One reason why poverty looks impossible is because poverty is apparently not a commonplace; rather it is a perceptible system that has been purposely planned to achieve a particular goal. Okay let’s break it down, money is a tool used by a particular class of people in the society to control another class or group of people in the society. If everyone is rich who will control who?

Who will have an upper hand over the other, money is made available more to a certain class known as the wealthy and less to another class called the poor so that the former can control the latter. Somehow human forces and sometimes natural forces make the availability of money so. Thus for a society anywhere in the world, to exist, without a noticeable divide between the poor and the rich is clearly and most definitely impossible.

Simply put there must be a rich man at the top and a poor man at the bottom who depends on the goodwill of the ‘rich man’ to survive. Now this ‘goodwill’ might not necessarily be gotten as a beggar but can be as a result of hard work. It is still ‘goodwill’ because the rich man can decide not to be benevolent enough to pay the poor according to the deserved wage, the poor is at the mercy of the rich who decides whether the poor will be under paid or over paid.

Now lets narrow it down to our beloved country, the present administration has supposedly put in place, structures, to break the wings of poverty in Nigeria but it still cannot however be said in totality that the scourge called poverty can ever be eliminated except of course there is a divine intervention from the creator of mankind. Whether we like it or not, accept it or reject it, poverty in Nigeria is here to stay.

However, one way forward is to build personal resistance to this nuisance called poverty by creating possible avenues to gain control of money. Don’t wait for the government to create a job for you, create one yourself. Get busy. Be knowledgeable yes be knowledgeable it is a great key that opens opportunities to seemly shut doors , knowledge is like a light that chases away darkness because in it lies wealth and its sustainability.

The power of knowledge is inexplicably awesome, too awesome for words to say the least. So in as much as knowledge is a viable tool to escape poverty, the importance of education cannot be over emphasized. Educate yourself the best way you can. Education gives you a chance to earn better wages. But take it or leave it, education is not in totality, a determinant that can deployed to escape poverty because a lot of less educated people are far richer than some educated folks. So it is not a determinant but it is a good starting point.

And the wealthy class can also be of tremendous help to the poor, by creating jobs with good wages, creating credit facilities with little or no interest rate, making donations in cash and materially to the needy, and mainly, generating opportunities for them to have access to an affordable life. Give to the poor, give and don’t stop giving because poverty can be frustrating and it can lead to depression and end with suicide. In whatever capacity you find necessary lend a helping hand.

And finally the government should get rid of restrictions that make it difficult for the poor to strive. Provide affordable or free access to health care, housing and education. Provide infrastructural facilities that will aid the social and economic well being of the poor in the society.

God bless Nigeria and all the readers of this article.

May you be empowered to succeed.