All hell broke loose yesterday at a court in Ejigbo Lagos after the discovery of a big snake inside the chamber of the Magistrate. 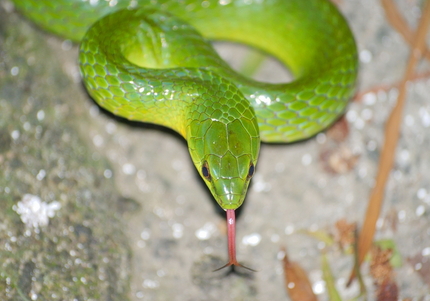 The incident which happened around 8:30 am terrified court staff who were preparing to receive Akeem Fashola, a newly posted Magistrate.

Hear what one of the court staff said about the incident:

“Oga was in the office and he had sat down for some time. He stood up and went into the toilet to allow the cleaner continue sweeping when she got close to his seat.
“It was the cleaner’s scream that attracted all our attention. She said as she was sweeping, her broom swept something that was heavy.

“And she looked up and realised it was a green snake. And the snake at the same time, skipped to the other side of the office, near the cabinets, where it hid.

“It was at the point that we came in and killed the snake. We are really shocked because no one could explain how the snake entered the chambers,”.