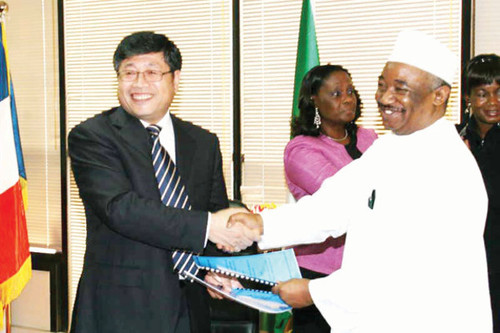 Over twenty investors from the Republic of China who are on a business tour in the country have indicated their readiness to invest about $300 billion to boost Nigeria’s economy.

The investors, who held a business forum on Wednesday with the Ogun State Governor, Senator Ibukunle Amosun in his office in Abeokuta, were led by the Chief Executive Officer (CEO) Shangai Engineering Works Nig. Ltd and Blue Diamond Investments, Mr. Festus Mbisiogu, are among China’s Fortune 500 selected companies that are involved in Agriculture, Power, Aviation, Housing and Railway development.

Each of the delegates according to Mbisiogu, is expected to pump in a whopping $15billion into selected areas of interest, a situation which would fetch Nigeria over $300 billion.

His words, “The positive multiple effect of the money the Chinese businessmen are bringing into Nigeria, would reduce unemployment in the country and also ensure that the issue of epileptic power supply which is undermining industrialisation, becomes a thing of the past”, Festus stated.

Mbisiogu, who disclosed that the delegates already have strong presence in other African countries having invested much money in Ivory Coast and Ghana, decided to come to Nigeria to share China’s experience with the people. He stated that apart from ensuring steady power supply in the country as well as making positive impact in the economy, the firms would make it possible to achieve Nigerians dream of becoming one of the strongest economy globally by the year 2020 would be a reality. He further stressed that “the investment is a stepping stone towards helping the federal government to actualize its target of offering 150,000 thousand Nigerians gainful employment”.

Addressing the team of investors who went in the company of representatives of China-Africa Investment Club, Governor Amosun stated that, “This is almost three years I have been in office and one country that has been supportive and close to Ogun State is China. Indeed, the Chinese Ambassador and Consul General always come to us. There are areas we are interested in which are Agriculture, Railway, Airport etc. and we will like to partner with China to develop these areas.”

Ogun State Governor Amosun said “ Ogun State has the largest base of industry in Nigeria because of its proximity with our sister state Lagos and that has given us the privilege of becoming the gateway to west Africa sub-region market.” He added that “Ogun State is home for industry, while Lagos is home for commerce and we allow private investors to enable us grow.” He expressed optimism that in the next three to six months, that the investors would have established there companies here in Nigeria.