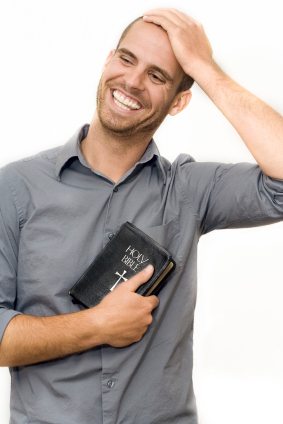 I was a loving husband until I became a “born again” Christian. Then I discovered certain things written by Paul in the bible appointing me the head of my wife. I eagerly accepted the appointment.

Jesus reveals that the worst kind of evil is the one which is presumed to have a religious sanction. I might be a murderer but in my heart-of-hearts I know it is wrong to kill. However, if the church convinces me that by killing men I am doing the work of God, then I can kill with gusto and without any conscience.

Wives, submit to your own husbands

Paul say: “Wives, submit to your own husbands, as to the Lord. For the husband is head of the wife, as also Christ is head of the church; and He is the Savior of the body. Therefore, just as the church is subject to Christ, so let the wives be to their own husbands in everything.” (Ephesians 5:22-24).
Even though this is addressed to wives and not to husbands, it was music to my ears.

I thanked God that he deemed it fit to make me head and not tail. As far as I was concerned, it gave me the divine sanction to lord it over my wife. Those who know my wife will immediately recognize that such presumed lordship would be fiercely contested.

It took a few battle-scars and the tutelage of the Holy Spirit for me to recognize this scripture which gave me putative authority over my wife “in everything” is morally and spiritually bankrupt.

In classically Pauline fashion, the scripture is full of inherent contradictions. Christian wives cannot say Jesus is Lord on the one hand (I Corinthians 8:6); and say husband is Lord on the other. Jesus says: “No one can serve two masters; for either he will hate the one and love the other, or else he will be loyal to the one and despise the other.” (Matthew 6:24). It is fundamentally irreverent for Paul to ascribe equal status to the husband “as to the Lord” in the life of the wife.

Paul says: “I want you to know that the head of every man is Christ, the head of woman is man, and the head of Christ is God.” (I Corinthians 11:3). This is preposterous. It is not only unscriptural, it is unworkable. In the Old Testament, Deborah was a judge in Israel. (Judges 4:4-7).

This made her the head of all the men by divine sanction. Today, let a man go and work in Nigeria’s Ministry of Finance and tell the female Minister; Ngozi Okonjo-Iweala, that “the head of woman is man.” He will not last on the job.

Jesus would never make the man the head of the woman. That would displace God; the one and only head Jesus prescribes for everybody. Indeed, Jesus does not give authority to a man over another human-being.

He says to his disciples: “You know that the rulers of the Gentiles lord it over them, and those who are great exercise authority over them. Yet it shall not be so among you.” (Matthew 20:25-26). The only authority Jesus gives his disciples is over demons: “I give you the authority to trample on serpents and scorpions, and over all the power of the enemy, and nothing shall by any means hurt you.” (Luke 10:19).

Matrimonial dictatorship
Paul is in error and he leads many Christian men into error. He has created a situation where, in Christian homes, the abuse of wives by husbands is rampant. The Christian husband asserts his “Paul-given” right to control his wife’s life. He uses Pauline scriptures and chauvinistic church doctrine to enforce his presumptive right to tell her what to do.

He demands her unquestioning submission to his whims and caprices. There is often little or no mutuality or loving consideration here. It is either his way or the highway. When the Christian man marries, he does not only marry a wife. He marries a cook, a washer-woman, a sex-slave and a maid, all in one Pauline package for the fee of a dowry. Every morning, he wakes up saying: “Thank you, Jesus!”

But it is all thanks to Paul that many a Christian husband believes his wife’s feelings and opinions are inconsequential. He may discredit them on principle or specifically because “Adam was not deceived, but the woman.” (1 Timothy 2:14). Or, he may give lip-service to respecting her views, but later disparage them as “emotional and not logical.”

Thereby, the Christian wife, who has been ransomed by Christ, is put back into bondage. She is constrained to dissociate from certain friends and family-members because of the need to keep “His Majesty” happy. She avoids some of her favourite activities for the sake of “keeping the peace.” If she objects to her Lord-husband’s hea-vy-handedness, she is castigated as “rebellio-us,” and “spiritually im-mature.” If she questions his opinions and decisions or disagrees with them, his lordship might just beat her up so that “the will of God” may be done in her life.

Let me speak directly to my power-drunk husband colleagues who would have me excommunicated for daring to love our female adversaries. No matter the forcefulness of your dictatorship at home, I assure you your wife resents you. She may be kneeling down for you on the outside, but she is standing up to you on the inside. If you would just take the time to study the words of Jesus, you would see that your house is built on sand. Sooner than later, it will fall.
Even if the husband were to be the head of his wife; that would still not be to his advantage. A Christian head is different from a secular head. Jesus says: “Whoever wishes to become great among you shall be your servant, and whoever wishes to be first among you shall be your slave; just as the Son of Man did not come to be served, but to serve, and to give His life a ransom for many.” (Matthew 20:27-28). This means even Paul’s position ends up making the husband the servant of his wife.

When there was disagreement between Abraham and Sarah over Ishmael, God did not take sides with Abraham as some bogus head of his wife. God declared his own overriding will, which happened to agree with Sarah and not with Abraham. (Genesis 21:9-12).

That is the role of God in the Christian home. Every decision is referred and deferred to him.
Because we fail to understand this, Christian men make lousy husbands. If you don’t agree with me, you don’t need to argue. Just prove me wrong in your home.(Vanguardngr)