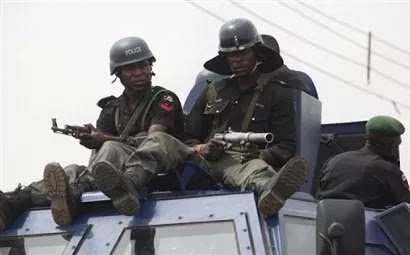 Some soldiers deployed to a checkpoint along Bauchi to Jos road have shot in error, a bus conveying policemen travelling from Taraba to Kaduna.

Headquarters of the 33 Artillery Brigade in Bauchi confirmed the incident on Sunday, describing it as unfortunate.

Maj. Joseph Afolasade, Assistant Director, Army Public Relations, 33 Artillery Brigade, said in a statement issued in Bauchi that the error was a result of the refusal of the driver of the bus to stop at the checkpoint for routine checks of occupants.

“The Headquarters 33 Artillery Brigade wishes to inform the general public that on 28th May 2016, at about 2:14pm, the troops deployed at Panshanu check-point along Bauchi-Jos road, opened fire on a bus.

“The bus drove dangerously through the checkpoint and refused to stop when flagged down on suspicion that it might be conveying terrorists or armed criminal elements, while approaching the check point.

“Regrettably, one person died and 3 others sustained injuries in the process.
”Preliminary investigation confirmed the identity of the occupants to be policemen who were in mufti coming from Taraba State to Kaduna for an interview.

“The Brigade urges all motorists, irrespective of status, to always obey the stop sign at all the check points to avoid reoccurrence of this unfortunate incident,” it said.

The Brigade urged member of the public to be conscious of the current situation in the country, especially the on-going operation in the North East to clear the remnants of Boko Haram terrorists from their hideouts.

“This is sufficient cause for all to abide by the rules at check points in the interest of all. The cooperation of the entire populace is necessary in the fight against insurgency and criminality,” it advised.

It, however, said the situation had been brought under control and the road, opened to traffic.