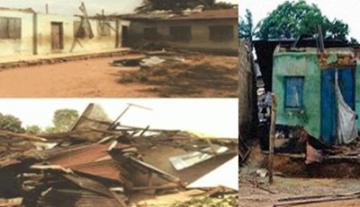 Over 26,000 individuals have been displaced while 4 lost their lives after a devastating windstorm that hits 8 LGA of Cross river state. naijagists.com

Multi-million Naira properties including economic trees and electric poles connecting light to most of CR communities were also destroyed in the storm.

Over 2,200 public and private houses had their roofs blown off, destroyed or left in shambles.
The havoc was uncovered when Unicef sponsored journalists to the affected communities in the eight local government areas of the state recently.

Conducting newsmen round the affected council areas and various communities, the Unicef Desk Officer and the Programme Manager for State Emergency Management Agency, Messrs Anthony Unoh and Andy Akpotu-Adesi, said that the incident occurred on 1 May, 2012 and that the affected local government areas include

According to them, following the disaster, the state Governor, Senator Liyel Imoke, invited the Director-General of National Emergency Management Agency (NEMA) from Abuja who arrived the state and carried out an on the spot assessment of the disaster.

So far, Boki and Odukpani councils have received their intervention fund to provide succour to the affected people.

Also, the Department of International Donor Agency had mobilised its staff to carry out a multi-sectoral assessment of the disaster.
Most of the affected public buildings include secondary and primary schools where students and the pupil are now forced to learn under tree shades.

Speaking to newsmen, the Head teacher of Secondary Commercial School, Kakwagom, Mr. Robert Otu Obi, appealed to the state government as well as donor agencies to come to their aid as teaching and learning has become very difficult.
”As you can see, the teachers are under the tree shade with their students hoping that it will not rain,” he added.

He regretted that school enrolment has reduced following the windstorm which he said was the worst in many years.
At Government Primary school, Obudu, Mr. Ernest Atianbende described the situation as “worst”.
The classroom blocks, he said, have been blown off since the 1 May, 2012 incident.

Also narrating his experience, the Head Teacher, Convent Primary school, Obudu, Mr. Ignatius A. Atsua, said “it becomes very sad whenever it rains. School enrolment has drastically reduced. There is no proper coordination on the part of teachers and pupils. The senior primary pupils have been moved into the Obudu Township stadium to receive learning.”
Mr. Aliko David Mkpa, a community leader from Utugwang, narrated how he lost his house to the windstorm while his family has fled to a neighbouring community.

He declared: “we need help from government and other donor agency immediately because it is becoming very difficult for us to eat.
“We are calling on the state government to as a matter of urgency come to our help especially at St. Colman’s Primary School here in Utugwang in Obudu.”

Also affected is St, Thomas’s Primary School in Ekajuk in Ogoja Local Government Area of the state, where pupils now learn under the trees.