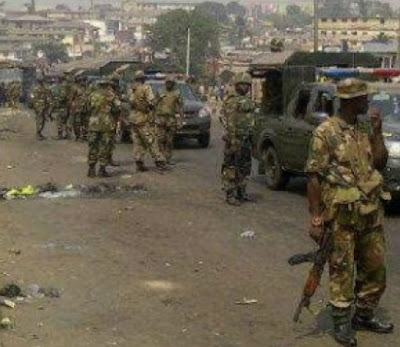 The attack occurred less than two months after 20 soldiers were killed by militants in the same area.

At least 40 Nigerian soldiers were killed and 65 others went missing in a deadly ambush by suspected members of the extremist group, Boko Haram, in the sect’s stronghold in Borno state, multiple defence sources have told PREMIUM TIMES.

Army authorities are miffed by the incident, and have ordered an investigation into the suspected operation blunder that gave the militants such an upper hand. The commanding officer of the unit that carried out the operation has now been removed from his post, officials say.

The casualty, one of the heaviest for the military in its campaign against the militant group in Borno, Yobe and Adamawa states, occurred along the Baga –Maiduguri road on Friday, September 13, in what our sources said was a classic case operational and communication failure.

A detachment of soldiers under the 134 Battalion of the 12 Brigade under the Multi National Joint Task Force, MNJTF, stationed in Kangarwa village in Kukawa local government, had conducted a reconnaissance to gather intelligence around the area, during which they established the presence of previously unnoticed Boko Haram camps.

The soldiers returned to their base and filed a report recommending aerial bombardment of the area, preparatory for a ground operation by troops, our sources, who declined to be named for security concerns, said.

But that plan was cancelled at the final minutes by an unnamed top official without formal communication to the more than 100 troops that had already advanced on the area.

“Due to lack of communication, the troop ran into the terrorists without knowing that the aerial bombardment had been cancelled and they were caught unawares,” one of our sources said.

The soldiers were trapped in the ambush under heavy fire from the militants who had surrounded the area, leaving at least 40 soldiers killed. Some 65 others have remained missing, our sources said.

The insurgents confiscated a huge cache of weapons from the soldiers after the attack.

As with past failures that ended in bloodshed and heavy casualty against the military, authorities have struggled to place a lid on the incident.

When contacted, the spokesperson for the Defence Headquarters, Chris Olukolade, a Brigadier General, said he was attending a meeting and would prefer a text message.

He did not respond to the text message.

But a top security source confirmed the incident and said the army headquarters have ordered an investigation.

Other officials, who spoke to PREMIUM TIMES anonymously, said the Boko Haram assault was a reminder of the difficulties they face daily contending a dodgy but adept enemy that continues to take advantage of mistakes by military planners, to inflict heavy damage on army units.

The attack came less than two months after a similar miscalculation on August 4 which also resulted in a heavy casualty following a similar surprise attack by Boko Haram on a camp at Malam Fatori.

Officials had told PREMIUM TIMES at the time that about 20 soldiers were missing after that attack.