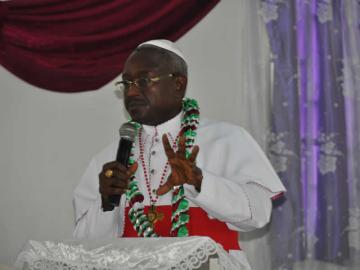 Southern Christian leaders have warned Northern Christians to be at alert and defend themselves by all means against evil Boko Haram terrorists.

This warning is coming as the Prelate, Methodist Church Nigeria, Dr. Ola Makinde warned against an imminent civil war as a result of the recent bombing of churches and reprisal attacks in Northern Nigeria.

The Christian leaders, under the aegis of the Niger Delta Christian Leaders Forum, NDCLF, issued a terse statement yesterday, saying that enough is enough and that Christians should make sure they defend themselves on Sundays in their places of worship.

“It is clear that the group of Islam called Boko Haram are jihadists who will stop at nothing until their purpose is achieved, which is to frustrate this government and Islamise this country. They have promoted terrorism and have made this country unsafe and uncomfortable even for indigenes.

“It is also clear that the government cannot do anything to fight this terror; the National Assembly is finding it difficult to handle these Islamic terrorists. The Northern leaders have shown to us that either they are supportive of it or it is too much for them to handle,” said Bishop Eddy Bebor, Secretary General of the forum.

“Worse of it all is that the target has been Christians and worship houses (Church). We have buried Christians and lost churches almost on weekly basis in the North.

“We therefore call on all Christians, from the North to South of Nigeria, that it is now time to fight back. You can’t sit down and be killed. We all have hands, we all have legs, don’t allow anyone to just come to your church and kill you there. Be on the red alert, be vigilant, be strong and defend your faith. Be ready to go the mile they are going to save yourselves from being killed,” he stated.

“Enough is enough, we thought we have, and live in a country that believes in brotherly love irrespective of religious background. The blood of Christians should not always be sacrificed on the altar for us to live together as one Nigeria.

Makinde on his part has warned that “if something serious, strategic and meaningful is not done, we may just be working our way towards another avoidable civil war.”

Speaking in Lagos, Southwest Nigeria , following the recent coordinated bombings in Kaduna and Zaria, the Prelate said: “for how long are we going to remain silent? Here we are begging the issue while innocent people are dying and their loved ones are yet to get justice. Is it a crime to be a Christian in any part of Nigeria? Every time we raise alarm and call for action, they will say it has no religious colouration which saddens my heart the more whenever I hear that.

“Before Sunday’s bombings, at least 200 people have been killed in 12 separate attacks on churches or places of Christian worship in northern Nigeria so far this year and al-Qaeda-linked Islamist terror group Boko Haram has explicitly claimed that it carried out at least 10 of them.

“Yet we are scratching the matter on the surface rather than intensifying efforts and exposing those behind these attacks. At least 40 persons were feared killed on Sunday in Kaduna and Zaria as suicide bombers attacked three churches. And in all of these bombings and attacks on Christians and churches, no person has been arrested or brought to book. Where are we going? Where is justice?” he asked.

“The sect said it planned to make the month of June 2012 the bloodiest month yet in its violent and bloody campaigns against those it tagged infidels. The report says they are planning a focused and bloody attack for which 300 suicide bombers have been recruited, sent to Mauritania and Somalia for training in handling weapons, bomb making and suicide bombing and they promise to start with Southern Kaduna and Plateau, two states populated with Christians, in a bid to avenge the death of Muslims in the reprisal attacks.

“I call on the Federal Government to protect the lives of innocent Nigerians, especially Christians who have been so patient and have refrained from any form of violence. The constitution to which they swore expects them to do so and they have a compelling duty to uphold the Constitution to the letter. Furthermore, nobody is above the law. Without bringing perpetrators and sponsors of these acts of terrorism to book, justice cannot be seen to have been done which is a big threat for our collective interest as Nigerians in our quest for a united nation.”

Inspiration For Today
Top 10 Highest Paid Athletes In The World