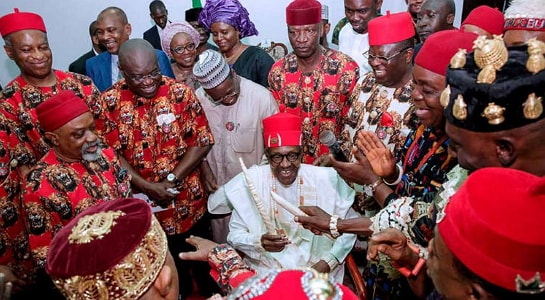 This was part of the resolutions reached by the group during its meeting in Abakaliki where it deliberated on several issues affecting Ndigbo economically and politically in the country.

In a statement issued at the end of the meeting by the Secretary General, Okwu Nnabuike and Deputy National Public Relations Officer, Ado Osaka of Ohanaeze Ndigbo Youth Council Worldwide, the group stressed that 2023 Igbo Presidency was not negotiable.

It argued that handing over power to Ndigbo was for justice, equity and fairness to reign in Nigeria’s political arena.

“OYC insists that 2023 Igbo Presidency is not negotiable, and it’s our date with destiny and any maneuvering may spell doom to the unity of the Country, as the recent unjust appointments since 2015 by the Presidency resulted to the rise of Biafra agitation, and those seeking Igbos votes in 2019 across Nigeria where Igbo reside must consider handing power to Igbos for justice, equity and fairness in 2023, those clamouring for restructuring should think twice, and no Northern President will restructure a system that favours the north more than the Southerners, it’s only a Southern President will restructure Nigeria.

“Ohanaeze Youths frown at the report that some cabal in APC had perfected plans to return power to South West instead of South East immediately after President Buhari quits Power. We still insist that the Presidency should refute such negative plot or it will make Ndigbo to consider other political options before them in 2019″.

“We are aware that irrespective of INEC officials denying Igbos their constitutional rights in some parts of Nigeria to collect their PVCs in 2015 outside Igbo land, our voting strength in South west is equal to that of the indigenes, even in the North. We have more than 12million registered Igbos in Northern Nigeria and 5million Igbos in south West”

“OYC insists that APC had not fulfil their political promises to the people of South East, which includes the campaign promise of President Buhari to revamp Enugu Coal mine which had been politically closed for 45years now, irrespective of the Projects the Presidency insists they attracted to South East, but if APC continue to give priority to other zones more than South East, it may spell doom for them, APC need Ndigbo More than Ndigbo needs them.

The group also congratulated the Governor of Abia state, Okezie Ikpeazu and the people of the state on the 27the anniversary of the creation of the state.

“OYC congratulate the Governor and people of Abia state on their 27 anniversary since the creation of Abia in 1991 and insists that Governor Okezie Ikpeazu have what it takes to transform Abia state, we observed that since 1999, Abia state have been unfortunate in governance, but since 2015, even with distraction from opposition, Governor Ikpeazu had performed more than any Governor that had governed Abia since 1999, but salute the Abia indigenes courage to stand behind Governor Ikpeazu and support his government.

“We support the single tenure of 6 years for President and Governors proposed by Senator Ike Ekweremadu, we believe it help to unite Nigeria than divide us.”