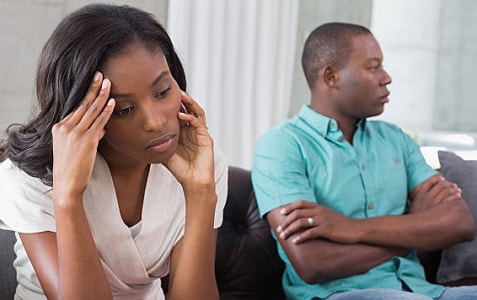 THE PREMISE OF THIS WRITING IS the true Christian doctrine. However, professors of other faiths are very much welcome to peep or peruse. I implore every Christian reading this to keep an open mind; not come with predetermined notions cast on stone, stubbornly unchangeable, to argue against whatsoever is written down here. Thanks for your reading!

MILLIONS OF PEOPLE ACROSS THE GLOBE ARE wed every Saturday, in the presence of God and a witnessing congregation. There, they exchange their marital vows, and love looks like a beautiful thing. But the sad reality is that so many marriages do not survive long after the glitz and glamour, the pomp and pageantry, and the shows and shimmers of the wedding ceremony. When constant quarrels and angry disagreements beset the marriage, and gales of other troubles hit the house with their intimidating impacts, those who once professed undying love to themselves are seen running headlong—like those seeking immediate shelter from a stormy rain—to a court of law, to seek divorce.

SOONER OR LATER, THEIR DESPERATE WISH IS granted. The spouses now go their own separate ways, feeling free and released from the nuptial vows they had gladly and willingly made before God, and what started with heartbeats of cheerful excitements slows down at last to a sobering, regrettable end.

THIS IS how our generality understand divorce: Disentanglement from a former marriage, and freedom to get married again, to an entirely different person. So many lives today is checkered this way. Both celebrities and obscure people marry and divorce alike, and move on with different people. Some people have even gone to the altar up to three or four times, or even more. It is their lives, and they have that individual, inalienable right of pursuit of happiness. No one should therefore interfere in their lives as long as it hurts nobody.

BUT, SHALL we, as Christians, be bold enough to find out if this is what divorce really implies: End of marriage? If so, why does the bible say that if you divorce your spouse and marry another person, that you commit adultery?(Mark 10:11-12; Luke 16:18). Why would God not leave divorcees alone to live their individual lives as if they had never married before? Does it not tell us something: that God still considers the man and the woman still joined together, even though they have divorced themselves? The fact is that no man, not even the Attorney General, can effectively terminate a marriage by pronouncing divorce. God was NOT joking when He said that what He had joined together, let no man—including the Attorney General—put asunder.(Mark 10:9).

THIS MADE Saint Paul write to the Corinthians in his first letter, that divorcees should remain celibate, and should the desire to go to the “Other Room” start to build up, they should locate their partners whom they had earlier divorced.(1 Corinth. 7:10-11).

TO FURTHER PROVE that divorce does not terminate marriage, let us consider vows. We are made to understand that it is better not to enter into any vow at all, than to vow and not fulfill it.(Ecclesiastes 5:5). Again, it is a sinful thing to break one’s vows.(Deuteronomy 23:21). That is why, when Jephthah vowed before God to sacrifice whoever first came through his door after his victory in a battle, he had to fulfill it, even though it hurt him dearly, for it was his one and only child, his beautiful, beloved daughter, that came greeting him.(Judges 11:30-40). It is also written, that those who shall dwell in God’s holy hill are those who fulfill their vows even when it hurts.(Psalms 15:4).

LET US FACE it now! When intending couples come before the altar of God, what do they vow? If I have not started to hear the unsaid, they say, “…in sickness or in health, in poverty or in wealth…till DEATH do us PART!” They do not vow, “…till loss of job do us part”, or “…till change of behaviour…”, or “…till sexual promiscuity…” or “…till wife battering…” or any other unwelcome change. But they, fully knowing how infinitely unknown the future is, and how capricious our fickle human nature is, still go ahead with the vow, TILL DEATH DO US PART. Death alone! Death is the content of the vow. Death is the only thing they give the power to separate them, and terminate the marriage.

AND SO, WE MAY answer this now: When a judge or a magistrate pronounces a couple divorced, has any of the couples died yet? No! The marriage is, therefore, still intact…untill death.

UNFORTUNATELY, MOST OF US HAVE become that fool whose mouth is his ruin, whose lips are a snare to himself(Psalms 18:7), for with the mouth, couples vow “Till death do us part.” But whilst both parties are still alive, they divorce and get married again to entirely different people. This is breaking the vow! My advice is that if you really want to be free after getting a divorce, find a way and kill your wife/husband! Yes! Make sure he/she dies! Then come back at last and convince God how evangelical it was to commit murder.

OR BETTER STILL, LET pastors and priests edit the words of the marriage vow to erase the part that says, Till death do us part. Let it rather read something like, Till irreconcilable differences do us part. That way, you could divorce and be truly divorced. But the truth would be that you were never married in the first place, for marriage is a covenant instituted by God, made to last until death.

WE SEE now, that there is no way out of marriage; that once you have exchanged the vows, you have entered! The question now is, What is divorce? What purpose does it serve humanity?

IF WE READ the bible with an open mind, ready to be instructed by the Holy Spirit, we would understand the true intention of God for allowing divorce. First, Malachi 2:16 tells us that God hates divorce. Yet the bible permits Christians to divorce. This permission was given because of man’s hard-heartedness,(Mark 10:3-5) and not that it was the true mind of God. God knows that even the people He had joined together could fight and really hurt themselves. This is sheer human nature at play here. A troubled marriage is one step away from hell; the man could kill the woman, and the woman on the other hand, is not incapable of performing fatal injuries on the man. Hence, God had to make that allowance for married couples to go their separate ways. Divorce is granted for the safety of the spouses. This does not end the marriage, but it does guarantee the safety of the couples.

DIVORCE COULD be likened to what they call Safe Mode in windows operating system, used to fix certain problems. In this mode, the windows operating system “runs with the minimum system files necessary.” In like manner, when a couple gets a divorce, the interaction between them reduces to the barest minimum. The marriage at this state is not yet terminated, but “runs with the minimum system files necessary.” Safe mode does not crash the computer, but solves problems in the system. Similarly, divorce does nor crash the marriage, but fixes its problems. Divorce is the Safe Mode of marriage, and not the end of it.

THE END OF ALL THIS IS that when people finally understand that there is no exit door from marriage, they would be more careful before they enter. Women would be less likely to follow men just because of their wealth, and men less likely to go after women just because of their beauty. Character would become the watchword. When people see doubtful signs in their spouses prior to marriage, one of the reasons they still go ahead with the marriage is that, somehow, in their subconscious, they have already decided that, at the very worst, they would get a divorce. But if they get to understand the true meaning of divorce, they would be less likely to still marry those people. Result? Divorce rate reduces drastically.

TO CONCLUDE, I SAY that the church should start preaching divorce if they ever wish to have divorce rate reduced. Unfortunately, even among the clergy are found men of God who have misguided notions of divorce. But if those who know this truth would teach this to the members of their church, it would serve the world a general good.

MARRIAGE AND DIVORCE SHOULD be equally preached in sermons to congregations. But the clergy reject the topic of divorce as if not speaking about it makes it not happen. The same bible that tells us of heaven equally speaks about hell, for the glory and beauties of heaven cannot be grasped at all until one could imagine the horror and ugliness of hell. That is why God says, “I have set before you life and death.” Why not life alone? Why include death? In that same manner, therefore, the church should set before her members marriage and divorce, for marriage could only be best understood with a proper understanding of divorce.

I AM Tony Chukwuma, known here as Metu Nyetu. If you have any questions, or feel like contacting me directly, my email is tulsagroove@gmail.com

GOD BLESS you all!.

Continue Reading
You may also like...
Related Topics:door, exit, marriage

How RCCG Member Who Married Lady Without Vagina Opening Forces Church To Introduce No Genital Test, No Marriage Rule
Is It Safe To Marry A Lady I Slept With On The First Date? I’m Confused..Please Help