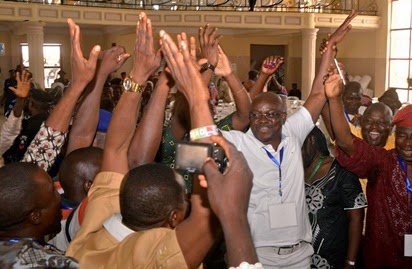 The Appeal Court in Ado-Ekiti, the Ekiti State capital, has reserved judgment in the suit by the All Progressives Congress (APC), challenging the election of Governor Ayo Fayose of the Peoples Democratic Party (PDP).

The APC urged the court to declare former Governor Kayode Fayemi, winner of the June 21, last year, governorship election.
The party, in the alternative, also urged the court to order a re-run of the election on the grounds that Fayose was not qualified to stand as a candidate at the poll.

The five- man panel, led by Justice Abdu Aboki, adjourned after listening to counsel to all parties in the appeal.

The APC is challenging Fayose’s election on the grounds that he was not qualified to stand election as a candidate by reason of his impeachment from office on October 16, 2006.

The party also sued the governor for the alleged forgery of academic certificates and violation of the Code of Conduct Rules.

The Election Petitions Tribunal, led by Justice Mohammed Sirajo, in a judgment delivered in Abuja on December 19, last year, upheld Fayose’s election and dismissed the APC’s petition.
APC’s counsel Hakeem Afolabi adopted and relied on all briefs filed on behalf of his client, urging the court to allow the appeal and grant all reliefs sought by the appellants.

Afolabi drew the court’s attention to the striking out of paragraphs 110-120 and 125a of the petition by the lower tribunal, which borders on the qualification of the second respondent (Fayose).
The APC counsel argued that the reason given by the lower tribunal cannot be accommodated under Section 138 (a) of the Electoral Act.

He contended that the decision of the tribunal was taken suo moto and that the right to fair hearing of the appellants was breached.
PDP’s counsel Robert Emukpoeruo argued that not only did the tribunal strike out the paragraphs in contention, it also considered the merit of the complaints of the appellants.
Fayose’s counsel Yusuf Ali urged the court to dismiss the APC’s appeal.

Ali argued that the constitution of the panel that recommended Fayose’s impeachment violated constitutional provisions in that it was not set up by either a chief judge or an acting chief judge.

INEC’s counsel Wilcox Abereton, in adopting his brief of argument, averred that APC’s candidate Kayode Fayemi had conceded defeat, maintaining that the appellant (APC) is no longer entitled to any appearance.

The Army Chief’s counsel, Abayomi Sadiku, prayed the court to dismiss the appeal. He was seconded by the IG’s counsel, Olusola Oke.

After listening to the lawyers, Justice Aboki reserved judgment in the appeal.