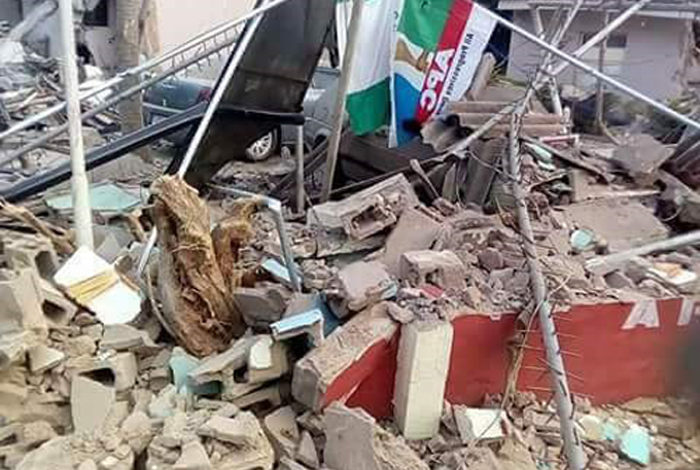 Kaduna State Governor Nasir El-Rufai is at the centre of a raging controversy.

Senator Suleiman Hunkuyi accused him of personally supervising the demolition of his property used as the secretariat of a faction of the All Progressives Congress (APC) in Kaduna.

The APC’s “Restoration” group promoted by the senator last Thursday queried El-Rufai and suspended three of his aides, including Special Adviser on Political Matters Uba Sani and Commissioner for Finance Suleiman Kwaru, for similar offences

The Hunkuyi-led faction suspended El-Rufai for six months, for “failing to reply to the query” three days after it was issued.

Hunkuyi today accused the governor of fighting dirty by demolishing the faction’s secretariat of the APC at 11B Sambo Road, Kaduna.

The fenced duplex was demolished in the early hours of Tuesday around 5am by the agencies of the state government.

The fence was levelled and the building pulled down. The vehicles parked in the compound were unaffected.

Director General of Kaduna Geographic Information System (KADGIS) Ibrahim Husseini, in a statement, said the building was removed by the Kaduna State Urban Planning and Developing Agency (KASAUDA) for flagrant violations of land use and non-payment of ground rent since 2010.