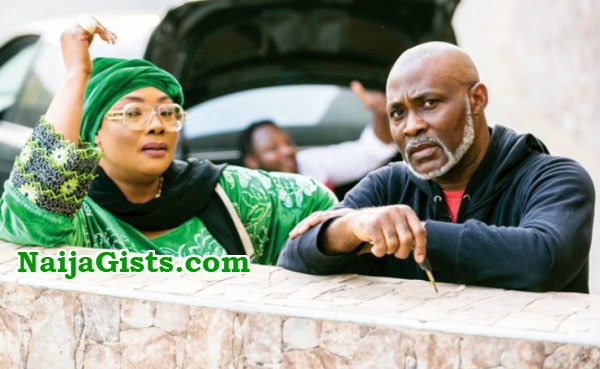 Following the boom in cinema business in Nigeria, last yuletide, the jig is about to return with a much anticipated film, ‘Zero Hour’, a thriller from the director of the celebrated ’30 Days in Atlanta’ and ‘A Trip To Jamaica’, Robert O. Peters.

Coming to cinemas across the country on March 22, 2019, ‘Zero Hour’, is a star-studded film, starring the ageless Richard Mofe-Damijo, and returning old Nollywood flame, Eucharia Anunobi in a story of love, business and crime, with other screen delights like Alexx Ekubo, Ali Nuhu, Rahama Sadau, Ayoola Ayolola, Halima Yusuf, and a notable ‘Cockcrow at Dawn’ actress, Ene Oloja, who is making her debut in feature film.

A collaboration of Galaxy Transportation and Construction Services Ltd, as Executive Producer; Native Media; Whitestone Pictures; and FKD Productions, ‘Zero Hour’ tells the story of Zamani (Alexx Ekubo) an only child and heir apparent of the CEO of Galaxy Ltd., who returns to take back his father’s business empire. In the mix are; his uncle and guardian, Danlami Davou (RMD), his cousin Awwal (Ali Nuhu), and his love interest, Zee (Rahama Sadau).

According to Ofime, producer of popular series, ‘Tinsel’, ‘Zero Hour’ which was largely shot in Abuja, had the support of the FCT’s biggest fashion houses like Vodi, Eljargo Couture, Pink Fleur, Sly Royal and Grazee Stiches.

Distributed by Genesis Cinemas, real buzz for ‘Zero Hour’ began, after an official trailer was released on February 18, 2019, gaining large tractions on the internet ever since. The movie which has been hailed by fans for picture quality and high design elements is also notable for its selection of cast across the Southern and Northern Nigerian film sectors, and showcasing a versatile actor like RMD in a different acting experience.