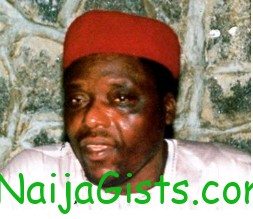 Pascal Bafyau died on the night of Tuesday May 15, 2012 at the National Hospital in Abuja at the age of 65

In his reaction, NLC president Abdulwaheed Omar described Bafyau’s death as tragic, especially “coming when the congress is still mourning the death of one of our officials”.

Omar said in a telephone interview that this was the first time NLC would be losing any of its presidents since the establishment of the congress.

“It is a very tragic event for us in the labour movement. Since the establishment of the congress, this is the first president to depart.

“Furthermore, it came at a time when we are still mourning one of the junior officers.”

Omar said that the congress would play an active role in Bafyau’s burial, saying that the NLC would meet with the family on the burial arrangements.

“It is our event and we have to relate with the family on what to do and definitely NLC will play a very major role in the burial.”

Mr Tayo Haastrup, the Public Relations Officer of the National Hospital, Abuja, confirmed to NAN that Bafyau’s remains were deposited at the hospital morgue in the early hours of Wednesday.

After leading the NLC, he quit in 1994 to join politics. He was a member of the defunct Social Democratic Party and participated in Abacha’s transition politics.

Until his death, Bafyau, who hailed from Adamawa, was a member of the PDP.