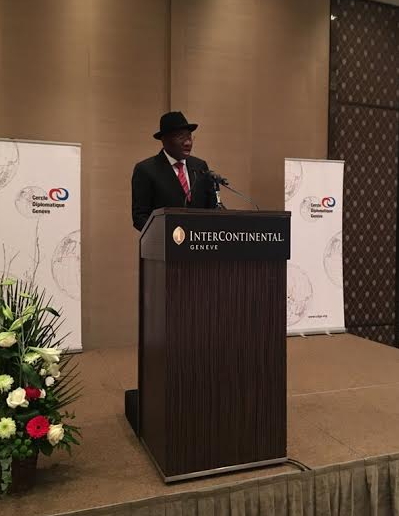 January 28 ,2016 – Ex-President Goodluck Jonathan Talks About His Achievements While In Office

Ladies and Gentlemen of the press, I thank you for coming to hear me speak on the twin issues of education and security.
Though this event is billed as a press conference on a Better Security and Education for West Africa, for the sake of time, I will focus on my experience in government which gave me a practical demonstration of how education impacts on security.

I will thereafter touch on my post presidential focus which is on advancing democracy and good governance in Africa and increasing access to opportunity for wealth generation in Africa.
If you peruse the official UNESCO literacy rates by country, what you will find is that all of the top ten most literate nations in the world are at peace, while almost all of the top 10 least literate nations in the world are in a state of either outright war or general insecurity. 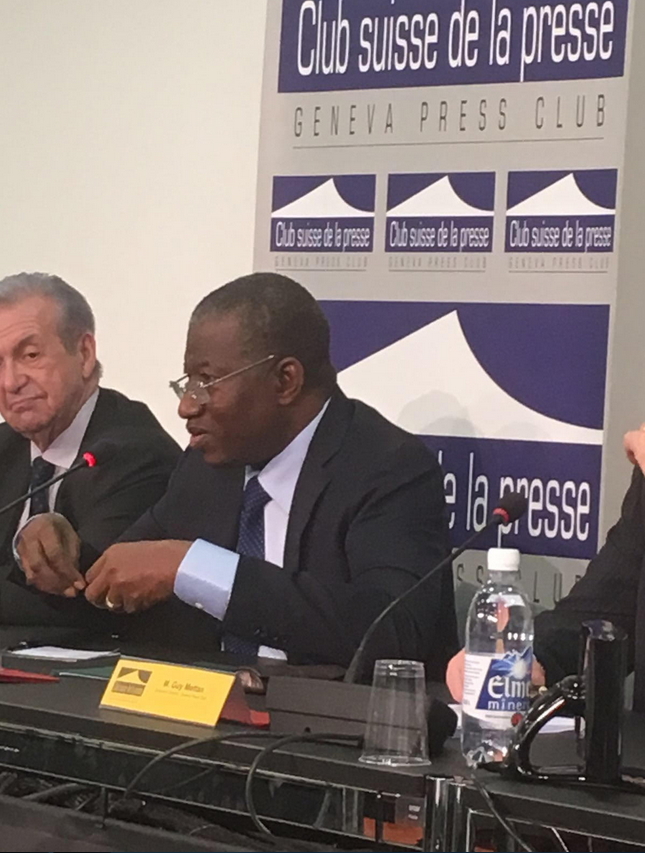 Lower education levels are linked to poverty and poverty is one of the chief causative factors of crime whether it is terrorism or militancy or felonies.

With this at the back of my mind, I began the practice of giving education the highest sectoral allocation beginning with my very first budget as President in 2011.
My policy was to fight insecurity in the immediate term using counter insurgency strategies and the military and for the long term I fought it using education as a tool.
As I have always believed, if we do not spend billions educating our youths today, we will spend it fighting insecurity tomorrow. And you do not have to spend on education just because of insecurity. It is also the prudent thing to do.

Nigeria, or any African nation for that matter, can never become wealthy by selling more minerals or raw materials such as oil. Our wealth as a nation is between the ears of our people.
It is no coincidence that the Northeast epicenter of terrorism in Nigeria is also the region with the highest rate of illiteracy and the least developed part of Nigeria.
In Nigeria, the Federal Government actually does not have a responsibility for primary and secondary education, but I could not in good conscience stomach a situation where 52.4% of males in the

So even though we did not have a responsibility for primary and secondary education going by the way the Nigerian federation works, I felt that where I had ability, I also had responsibility even if the constitution said it was not my responsibility.
Knowing that terrorism thrives under such conditions my immediate goal was to increase the penetration of Western education in the region while at the same time making sure that the people of the region did not see it as a threat to their age old practices of itinerant Islamic education known as Almajiri.

For the first time in Nigeria’s history, the Federal Government which I led, set out to build 400 Almajiri schools with specialized curricula that combined Western and Islamic education. 160 of them had been completed before I left office.

I am also glad to state that when I emerged as President of Nigeria on May 6th 2010, there were nine states in the Northern part of the country that did not have universities. By the time I left office on the 29th of May 2015, there was no Nigerian state without at least one Federal University.

Now the dearth of access to formal education over years created the ideal breeding ground for terror to thrive in parts of Nigeria but there are obviously other dimensions to the issue of insecurity in Nigeria and particularly terrorism.

You may recall that the fall of the Gaddafi regime in August 2011 led to a situation where sophisticated weapons fell into the hands of a number of non state actors with attendant increase in terrorism and instability in North and West Africa.

The administration I headed initiated partnership across West Africa to contain such instability in nations such as Mali, which I personally visited in furtherance of peace.

And with those countries contiguous to Nigeria, especially nations around the Lake Chad Basin, we formed a coalition for the purpose of having a common front against terrorists through the revived Multinational Joint Task Force (MNJTF).

Those efforts continue till today and have in large part helped decimate the capacity of Boko Haram.
Another aspect of the anti terror war we waged in Nigeria that has not received enough attention is our effort to improve on our intelligence gathering capacity.
Prior to my administration, Nigeria’s intelligence architecture was designed largely around regime protection, but through much sustained effort we were able to build capacity such that our intelligence agencies were able to trace and apprehend the masterminds behind such notorious terror incidences as the

Other suspects were also traced and arrested including those behind the Nyanya and Kuje bombings.
Not only did we apprehend suspects, but we tried and convicted some of them including the ring leader of the Madalla bombing cell, KabirSokoto, who is right now serving a prison sentence.
But leadership is about the future. I am sure you have not come here to hear me talk about the way backward. You, like everyone else, want to hear about the way forward.

I am no longer in office, and I no longer have executive powers on a national level. However, I am more convinced now than ever about the nexus between education and security.
My foundation, The Goodluck Jonathan Foundation, was formed to further democracy, good governance and wealth generation in Africa.

Of course, Charity begins at home and for the future, what Nigeria needs is to focus on making education a priority.
Thankfully, the administration that succeeded mine in its first budget, appears to have seen wisdom in continuing the practice of giving education the highest sectoral allocation. This is commendable.
I feel that what people in my position, statesmen and former leaders, ought to be doing is to help build consensus all over Africa, to ensure that certain issues should not be politicized.

Education is one of those issues. If former African leaders can form themselves into an advisory group to gently impress on incumbent leaders the necessity of meeting the United Nations Educational, Scientific and Cultural Organization (UNESCO) recommended allocation of 26% of a nations annual budget on education, I am certain that Africa will make geometric progress in meeting her Millennium Development Goals and improving on every index of the Human Development Index.

Data has shown that as spending on education increases, health and well being increases and incidences of maternal and infant mortality reduce.

Average Life Expectancy of 47 years before 2011 to 54 years by 2015.
I had earlier told you about the connection between education and insecurity.

I believe that it is the job of former leaders and elder statesmen to convince Executive and Legislative branches across Africa to work together to achieve the UNESCO recommended percentage as a barest minimum.

I intend to offer my services, through The Goodluck Jonathan Foundation, for this purpose and I invite interested organizations to help us make this happen.