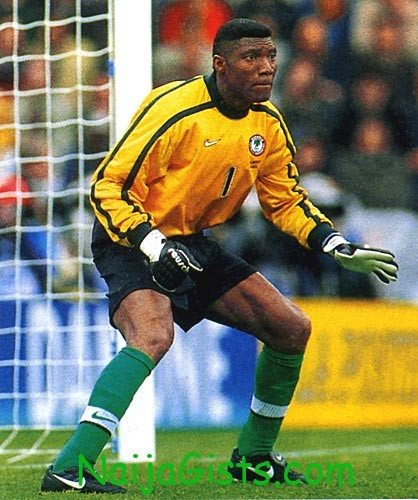 No 18, Idowu Taylor Street on Victoria Island, Lagos is home to Movida, a prestigious night club on the island, it is a hang-out for top celebrities, footballers, night-crawlers and what have you. naijagists.com

Another side-attraction of this highly frequented night club is its gaming centers. That, however, is not the thrust of this story; the thrust of the story is that one of the frequent visitors to this night-club is Ex Super Eagles goalkeeper, Peter Rufai, who is popularly known as Dodo Mayana.

The highly revered goalkeeper who manned the goalpost for the senior national team of Nigeria during the 80’s and early 90’s apart from his exploits as a dependable goalkeeper is also a very good player of the board game called Snooker.

What is however sad is that, apart from playing the game which he is also good at, he gambles on it. His gambling habit is so chronic that he gambles so expensively on it with hard currency at times to the tune of N500, 000 and above. According to a very reliable source who is also a regular caller at the club claims that if Peter Rufai is out of cash he gambles with his fashion accessories.

It is also revealed that Peter Rufai is not alone in this pastime as other notable celebrities are also involved in this habit. Sources close to him however claimed that the Ex Super Eagle goal-keeper is wealthy and can afford whatever pastime he chooses to engage in and reports has it that aside that he wins frequently. (culled from Global Mag)