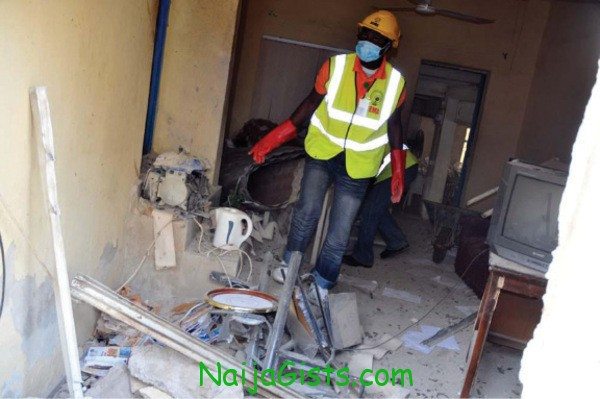 Another bloodshed happened across northern Nigeria on Saturday as 3 suspected Boko Haram members were killed in Maiduguri following an explosion at a house where they were said to be coupling together an explosive device. The suspected bomb factory is located in Shuwari area of Maiduguri. naijagists.com

The incident happened on the same day unknown gunmen suspected to be Boko Haram members attacked policemen on duty along Kumbotso rail line in Kano, killing a police constable and injuring another officer.

The Maiduguri blast which eyewitnesses described as “heavy” occurred around 9am. Residents living close to the scene said they heard a loud bang which was followed by thick smoke.

A resident who simply identified himself as Ba’ina and who lives in Shehuri said: “I was preparing to go to the  shop when I heard a loud bang. It was scary so I quickly ran back into my house.”

Men of the Joint Task Force (JTF) quickly cordoned off the area. The JTF views the discovery of the bomb factory as a breakthrough because daily bomb explosions have become the norm in Maiduguri and its environs in the last few months.

JTF Spokesman, Lieutenant Colonel Hassan Ifijeh Mohammed, who confirmed the blast at a press briefing in Maiduguri said his men were quickly drafted to the scene where they discovered that a house inhabited by unidentified suspected Boko Haram members had exploded.
Mohammed said investigations showed that the house was being used by the sect as a major factory for the production of Improvised Explosive Devices (IED).

He added that three mutilated corpses of suspected sect members responsible for manning the factory were found inside the house.
“The suspects were killed in the process of making an IED for deployment. The house was equally destroyed by the explosion. Efforts are on to track down other suspects and the owner of the house,” he said.

Explosive items which the JTF recovered from the scene of the blast, and which were displayed at the press briefing include three big drums filled with ready-made explosives connected with wires, large quantity of unused explosive materials, three AK 47 riffles, bomb timers, a laptop and other items use in making bombs.

Available information on the Kano incident indicates the suspects opened fire on policemen who were on duty at a checkpoint at about 10 pm.  Kano State Police spokesman, Magaji Majia Musa, confirmed the incident, saying “some unknown gunmen suddenly attacked our police men who were at a stop and search check point at about 10 pm. The gunmen opened fire on them, leading to the death of a police constabulary, while another police officer sustained injury.”

The injured police officer who is currently on admission in a hospital in the metropolis, is said to be in a critical condition as doctor are battling to save his life.

Musa who claimed that the Police Command was on top of the situation, said investigation was on to unmask those behind the incident, pointing out they are yet to establish whether the attackers were members of the Boko Haram sect.
Following the incidents on Friday and Saturday, residents of the ancient city of Kano have been gripped with fear over where their next attack would take place.

Security has been beefed up in major areas of the ancient city, including the Government House, where fierce-looking, gun-totting mobile policemen are stationed at strategic positions. As at the time of filing this report no arrest has been made.
In a related development, the Boko Haram sect on Saturday threatened to launch attacks in Kano if the security services continue to arrest its members.

Sect leader Abubakar Shekau claimed in the letter sent to the state government and the media that the group’s members have been arrested over the past five months on the pretext that they were thieves and armed robbers.

“We are therefore compelled to write this letter to inform Kano residents of this development so that when we launch attacks in the city as we have been doing in Maiduguri, they should not blame us,” Shekau said in a letter emailed from an address previously used by the sect(the nation).