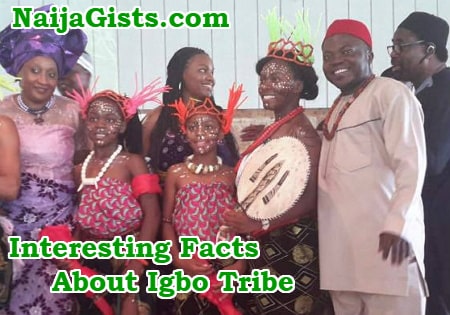 Origin of the Igbo Tribe: Igbo People in Nigeria, their Traditions & Historical Facts

How much do you know about the Igbo tribe: their tradition and history?

Follow us, as we take you through the origin, traditions and historical facts of the Igbo people in Nigeria.

The Igbo tribe is one of the three largest ethnic groups in Nigeria (the other two being Hausa and Yoruba). They are indigenously sited in the south eastern region of the country; although, they can be found in virtually all habitable regions in the country and beyond.

In the subsequent sections, we’ll be clarifying some age long controversies surrounding the origin and traditional belief of the Igbo people.

Is the Igbo Tribe from Israel?

As believed by many Igbos, especially the ardent followers of IPOB – Indigenous People of Biafra – the Igbo tribe originates from the Jewish land of Israel. This subset of the Igbo tribe tags themselves Igbo Jews.

The Igbo Jewish movement came to fore in the late 18th century, when an Igbo man named Olaudoh Equiano (locally pronounced Orauda Ikwuano), in his autobiography, traced and described the migratory origin of the so-called “Igbo Jews” to Israel.

However, despite the passion and indigenous support for the Igbo Jewish movement in Nigeria, the movement still remains unrecognized by the global Jewish community, most notably the Israeli Supreme Court and other prominent Jewish bodies.

Furthermore, the claim that the Igbos originate from Israel has been dismissed as mere speculation, as there is no document, artifact or any form of proof to indicate such. In fact, the supposed “genetic proof”, which has been claimed to establish some sort of similarity between the Igbos and the ancient Jews still remains a fallacy to many.

In light of this, many have dismissed the Igbo Jewish movement as an underhand attempt by a certain group of Igbo migrants and tourists, in a bid to gain recognition and permanent residency status from the Israeli government.

In a nutshell, the question still remains unanswered: is the Igbo tribe from Israel? There is no tangible proof to affirm this. In fact, there are other, more credible, claims as to the actual origin of the Igbo tribe, and we’ll be looking at one these in the next section of this article.

Where Did Igbo Tribe Come From?

As the speculation rages on, in the midst of the global disapproval of the Igbo’s Jewish status, the question that comes to mind is: where did the Igbo tribe come from?

As emphasized above, the actual origin of the Igbo people is somewhat cloaked in mystery. While certain school of thoughts believe that the Igbos originate from the Middle East, a more credible claim indicates that the Igbo tribe takes its root from the ancient Niger-Congo (West African) people.

The history and origin of the Igbos cannot be discussed without mentioning the pioneer Igbo kingdom of Nri. The Kingdom, in ancient times, formed the core (central zone) of Igbo land, serving as the hub of religion and political activities of the ancient Igbo people.

In fact, all notable cultural/historical tales of the Igbo people emanated from the laws of the theocratic kingdom of Nri, which was then perceived as a divine kingdom.

Fast forward to the modern day, the Igbos are the original settlers and landlord of the south-eastern land of Nigeria, which is colloquially known as “Igbo land“. The region is divided into five geographical/political zones (states), including Imo, Anambra, Enugu, Abia and Ebonyi. Also, some parts of Delta and Rivers states have Igbo people in considerable numbers.

Round up; the Igbos do not have a concise historical path, as various subsets of the tribe hold different beliefs as to their actual origin. However. despite the obvious differences in their respective belief system, they still stand together as one and remain one of the largest and most influential tribal groups in Nigeria.

When Did the Igbo Tribe Began?

There are archeological artifacts that indicate that the tribe known as Igbo today might have been in existence since as far back as 2500 BC. However, the Igbos became known as a single tribal entity some time in the 15th century, in the mid 1430s.

Who is the Father of the Igbos?

The widely acclaimed father of Igbos, who is believed to be the ancestral father and originator of the Igbo tribe is known as Eri. He is reportedly of Jewish origin, and according to historical findings, he was the grandson of Jacob (the biblical Jacob).

Eri migrated from Egypt (before the exodus of the Israelites) alongside some of his kinsmen. He travelled by sea and later arrived at a settling point, in a place known as Aguleri today.

Eri settled down in this region and procreated. One of his descendents, who is known by the name of Menri, went on to settle in a big forest, which later developed into the ancestral Igbo kingdom of Nri.

Superstitions of the Igbo Tribe

During the time of the theocratic kingdom of Nri (Igbo tribe’s ancestral kingdom), certain laws and prohibitions (taboos) were allegedly put in place. Many of these laws have been dismissed by modern day Igbos as mere superstitions, and thus do not hold water.

Below is a summary of some superstitions of the Igbo tribe:

Below are some interesting facts about the Igbo people, their custom and traditional practices.

Below are some interesting facts about Igbo men:

The Igbo tribe’s primary language is Igbo, which is one of the three internationally recognized indigenous languages of Nigeria. The language is spoken by 20% (est.) of the Nigerian population, most of whom are native speakers.

Igbo tribe’s traditional system of belief centres around the glorification and exaltation of “Amadioha” – the god of thunder – who is seen as one of the top ministers of Chukwu, the supreme creator of earth.

While the traditional belief practices are still in vogue, especially in the rural communities, majority of Igbos have adopted the Christian faith, with most subscribing to the Roman Catholic belief.

Furthermore, a tiny fraction of the Igbo tribe associates themselves with the Jewish community. This set of people, colloquially known as Igbo Jews, holds the Jewish belief and devoutly so.

Why are the Igbo People Light Skinned?

While most Igbos are generally dark-skinned, like other West Africans, it is an open secret that the Igbos have a larger percentage of light-skinned individuals than other tribes in Nigeria. The reason behind this remains shrewd in mystery, as there have been claims and counterclaims in this discourse.

As believed by many, during the precolonial era, during the time of the Portuguese dominance and slave trade in West Africa, the Portuguese slave masters had free sexual encounters with a significant number of Igbo women. Some of these women were slaves, while others were free women who sought the Portuguese masters’ affection.

Aptly put, the lighter skin of the Igbos have been attributed to the alleged “Caucasian-Igbo gene” carried by the descendants of those who had intimacy with the Portuguese slave masters.

The above is one of many tales and mysteries surrounding the origin of the Igbo tribe, most of which remain unsolved till date. While this might be actually be true, there is no credible proof or historical document to back it up. Hence, it remains a mere speculation.

Have any input or something to correct? Kindly share your opinion with us in the comments section below.