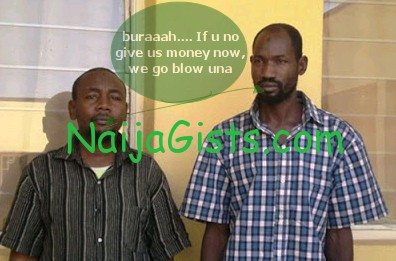 The Department of Security Service (DSS) in Borno state Thursday January 17 paraded two notorious extortionists who faked their identities as members of Boko Haram and demanded money from civilians through telephone threats.

Ahmed Abdullahi, who is the Borno state Director of DSS, made this known to journalists while parading the two suspects at the DSS office in Maiduguri. Abdullahi explained that the extortionists operated under the guise of being members of Boko Haram to perpetrate their crimes.

“For sometime now, the SSS has been inundated with complaints from members of the public on threat messages aimed at extorting money”, Abdullahi said. “Perpetrators, who operate in cliques, exploit the security situation in the state to intimidate their victims while masquerading as members of the sect.”

After series of investigations, the SSS said it apprehended two suspects believed to be leaders of separate syndicates in the persons of one Mohammed Garba and one Luka Dogonyaro.

The DSS boss added: “Garba is a 39-year-old, Babur-speaking man of Borno state who grew up in Kano; he specialises in extorting money from private individuals. Among his victims are some present and past chairmen of Local Government Councils (LGC) in the state.”

Abdullahi said that Garba was trailed to his hideout in Kano after series of investigations by the service.

“Dogonyaro is another 39-year-old dismissed police corporal who operates a separate racket that has defrauded many people in the state. Among his victims were the chairman of Borno State Chambers of Commerce who was threatened with assassination”, said Abdullahi.

The two accused are expected to be arraigned before the court of law promptly.