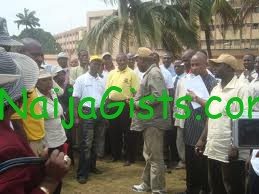 Over 1840 Primary and Secondary School teachers has been sacked in Kaduna for using forged / fake certificates. naijagists.com

Below is what the commissioner for education said in regards to this crime:

“after discovering that the standard of education has fallen in the state, government decided to embark on an exercise to flush out teachers with fake certificates. So you can imagine a teacher that has been working for years without the necessary qualifications and its implication for the educational system. So the first thing we did was to flush out these teachers with fake certificates. At least 1,840 of them were shown the way out.”

This is serious crime that should never be tolerated.